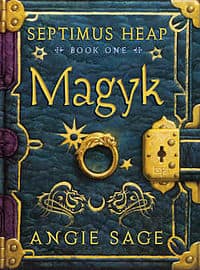 Septimus Heap was born the seventh son of a seventh son but then he was declared dead and whisked away, but that same day his father Silas found a baby half frozen outside the city.  Jenna grew up thinking that the Heaps were her only family but her parents both suspected her real importance.  Boy 412 doesn’t remember anything before the Young Army and has been raised to believe that Magyk is bad but the Castle has become an unhappy place since the Supreme Custodian took control and things are only going to get worse.

The telling of the story is a large part of the experience that defines this book.  It is told by a narrator filled with humor and detail and character.  Ironically this narrator is not actually a character as lively as it may be.  There are many tropes is this unique tome but it never gets boring because they are woven together in surprising and unique ways that you are still never sure what is going to happen next.  Take for example mistaken identity: here there is more than one case of mistaken identity some that even overlap each other.  The primary characters that we follow are mostly 10 years of age including Jenna, 412, and the apprentice with one 12 year old, Nicko.  If you were ask me to name a protagonist I would squirm because the narration varies who it tends to favor and follow, and honestly I think it is done intentionally so that a boy reading the story might favor Nicko or 412 but a girl will naturally favor Jenna.  The ending is not as epic as I originally anticipated but it suits the overall tone of the novel.

Personal reactions: I try not to be influenced by the reviews of others, especially bad ones, unless it is a reviewer that I really trust.  In the case of Magyk I have happened to read some that find this book overly childish even for a children’s book but there is something I have realized over the years.  Often when people describe a book this way what they really mean is that it has a sense of humor.  Especially silly narrators like this one apparently are offensive who think that our children need to take themselves seriously.  Ironically at the age this is aimed for I probably did take myself seriously enough to have probably found this book too silly, now I absolutely adore it.  I’m sure plotting this novel was a beast with all the foreshadowings and cases of mistaken identity, making sure that everything happens in the right order.  Yet somehow for as complex as it is at moments I find it hard to not simply think of this book as Fun.  I feel like it is equivalent to the classic adventures people speak so fondly of, but I can’t be sure I never made it through one myself.  I’m ready to tear through the rest of the series, some other things might get put on the back burner.