Take A Thief by Mercedes Lackey 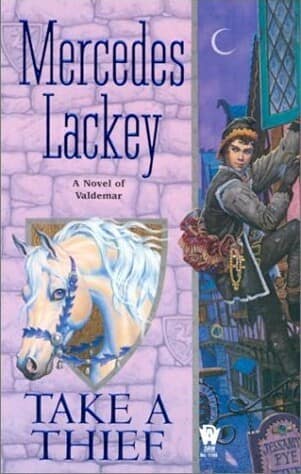 Skif lives a harsh life under the thumb of his uncle and cousin. Things get a little better and then get worse again.  It is a hard world.  His world turns even more upside down when he tries to steal a horse and ends up stolen himself.

First I have to start with the odd thing.  The moment described on the back of the book doesn’t happen until almost two-thirds of the way in.  This is kind of unusual but so much of what happens before is spoilers that I get it and even more than that I can imagine that when this story began this might have been the first beginning as the story developed.  A thief trying to steal a companion and the rest formed around it.  It also makes this book very hard to talk about without spoilers.

I love the concept of the Companions and the Heralds.  It is so unique, interestingly enough it is a smaller part but that unique thinking is what makes Lackey’s books so interesting.  You can find a great many books where the protagonist or another character lives a hard life.  We are fascinated by thieves but the detail of thieves that steal dirty and damaged laundry because it is less likely to be noticed and then clean and mend it… there is so much more to that!  Skif at times is filled with such negative emotion, but you get it and he is conflicted which is just another layer on the realistic cake.  And I’m drifting into the senseless squeeing!  I think that this is excellent world building and character creation.