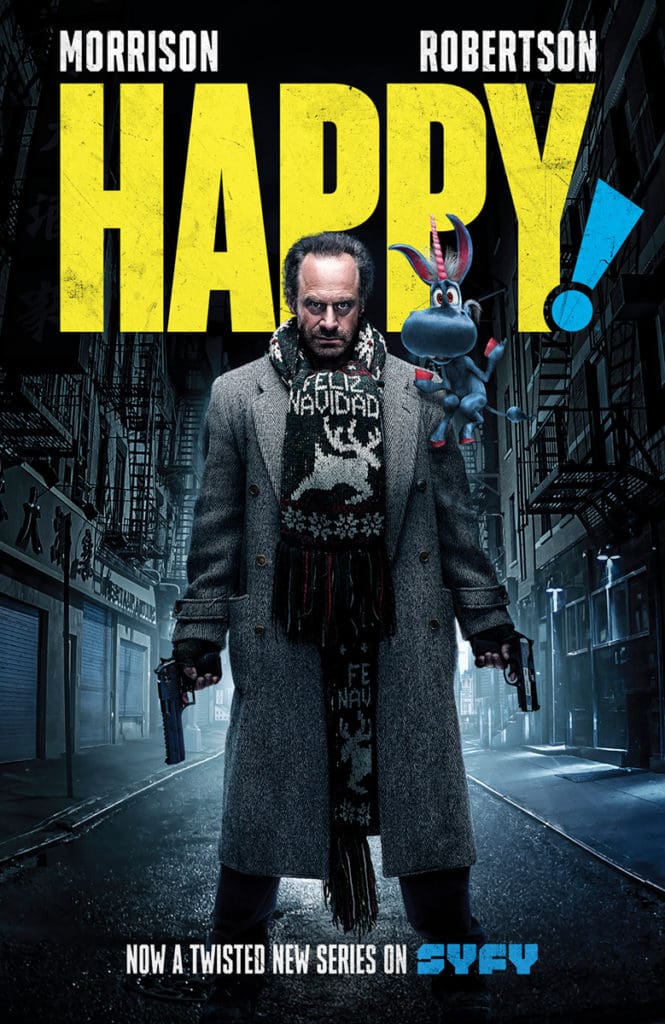 HAPPY! starring Chris Meloni (Law & Order: SVU) as Nick Sax and Patton Oswalt as the voice of Happy, the imaginary blue winged horse, will premiere on SYFY Wednesday, November 29 at 10/9c. This first printing of the deluxe trade paperback edition will feature a photo cover that ties into the SYFY show!

Meet Nick Sax: a corrupt, intoxicated ex-cop turned hitman, adrift in a stinking twilight world of casual murder, soulless sex, eczema, and betrayal. With a hit gone wrong, a bullet in his side, the cops and the mob on his tail, and a monstrous child killer in a Santa suit on the loose, Nick and his world will be changed forever this Christmas by a tiny blue horse called Happy....

I have intentionally only watched the trailer for the show so far. However I admit it was the third time the commercial came on that I recognized the actor, talk about transformation. Now I do plan on watching it at some point, I am curious to see what they change.

On the first page you get the impression of how rough this book will be with the language, urine, and vomit. I love it. You get a good sense of back story fairly quickly, but they also waste no time getting into the action. The grit of the art is on point with the story. There are a few odd moments but I love the moments as he is dying, the contrast. I like that even though it is winter and there is snow everywhere Happy is the main place that they use blue. If language offends you, don’t read this book but I think the usage here is all perfectly in character.

Nick fights Happy for so long and I will admit, I didn’t see why he would suddenly care coming. There was a lot of how it all came together that I didn’t predict. The Deluxe Edition came with an additional 10 pages of story, luckily we had one person with an older edition so we could figure out which pages. There is a moment where Nick is losing hope and it is one of those moments where reading it with just feels correct, but I can see how it functioned without. I think it is definitely better with. Ultimately I loved it. Mind you, I also watched Fortitude on Christmas Eve instead of Christmas movies, so that probably says something about me.