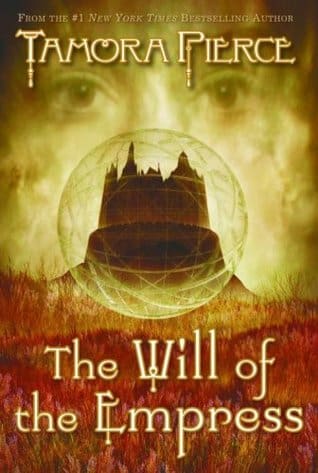 The Will of the Empress by Tamora Pierce
Series: The Circle Reforged #1
Format: Paperback

For years the Empress of Namorn has pressed her young cousin, Lady Sandrilene fa Toren, to visit her vast lands within the Empire's borders. Sandry has avoided the invitation for as long as it was possible. Now, listening to her guilty conscience, Sandry has agreed to pay that overdue visit.Sandry's uncle promises guards to accompany her. But they're hardly a group of warriors! They're her old friends from Winding Circle: Daja, Tris, and Briar. Sandry hardly knows them now. They've grown up and grown apart. Sandry isn't sure they'll ever find their old connection again - or if she even wants them to.When they arrive at the palace, it slowly dawns on Sandry why the Empress has really brought her to Namorn. She's set a cunning trap to keep Sandry in the brutal Empire forever, a simpering lady in her cousin's court and the miserable wife of a noble.The Empress has wily and powerful mages on her side. But so, of course, does Sandry...if she can get them to work together.

Sandry has always had responsibilities beyond those of a Mage. Her blood comes with it’s own duty. Here it becomes truly apparent. It makes a nice vehicle for forcing the four friends together enough to set forth on their next adventure. They have grown apart in very understandable ways. They have spent years apart, vital years that distinguish children from young adults. For instance Briar is now an attractive young man, cavorting with attractive young women. Sandry isn’t just dealing with her inheritance but also the young suitors that go along with it. The change in ages in well portrayed as well as their discomfort with each other. We know most of the things they went through but more time has past since we last saw them so we don’t know as much as we might thing. Briar especially is haunted. I think I was most impressed by their ability to trust anyone affiliated with the Empress, but it was believable. It is good to finally see some budding romance for some of our crew, even if it isn’t forever love. I have to remind myself that especially with Alanna, Tamora Pierce does a good job of not making the first love, the final love. I really enjoyed the book, but I think the very end, the final resolution, was almost too easy.