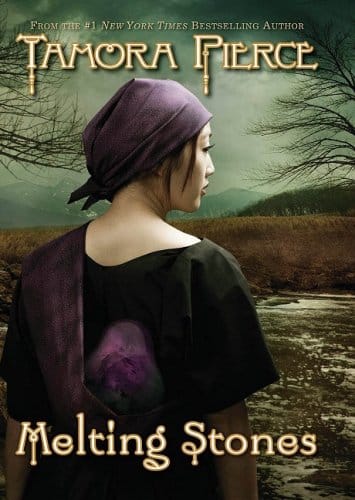 Four years have passed since Evvy left the streets of Chammur to begin her training as a stone mage. At fourteen, she's unhappy to be on a new journey with her mentor, prickly green mage Rosethorn, who has been called to the Battle Islands to determine why the plants and animals there are dying. Evvy's job is to listen and learn, but she can't keep quiet and do nothing. With the help of Luvo, the living stone heart of a mountain, Evvy uncovers an important clue. Now, with the island on the brink of disaster, it's up to Evvy to avert the destruction that looms ahead.

First confession: When I picture Luvo, I picture an adipose from Doctor Who.

Briar, Tris, Daja and Sandry… none of them are here. The only familiar faces are Rosethorn and Evvy. Last time we saw the effects that war had on Briar, but it might have been even harder on these two. They have come to an island because the plants and animals are dying. Most of us probably realize what that means, but we have to remind ourselves that while this universe has a lot of science, it still isn’t our science and education is not as wide spread, though they are constantly working on it. Evvy is young and has lived a hard life, she doesn’t like many people so it makes it hard for her to care sometimes. It is a real struggle. Selflessness seems to come easy to most of the mages, Rosethorn is the main one who probably can sympathize with Evvy’s struggles. Evvy lashes out and it is sometimes painful to watch. She does make new friends but it is hard for her.

Most of these books require research, but this book definitely wins the award for most science. The book was also written originally as an audio book, so the voice is different than the others in the series. I was hesitant at first, but I enjoyed seeing more of Evvy. Really though I always enjoy information about Rosethorn. I hope someday we get a book with more Lark. I know that the next book actually goes back in time to the war that Evvy, Briar and Rosethorn go through. I can see why some feel like this series is disjointed in the scale of the overall universe. I also laughed and squealed.

I am caught up except the most recent which is still just in hardcover… so I can finally say with true knowledge that while I enjoy Emelan, Tortall is my home.