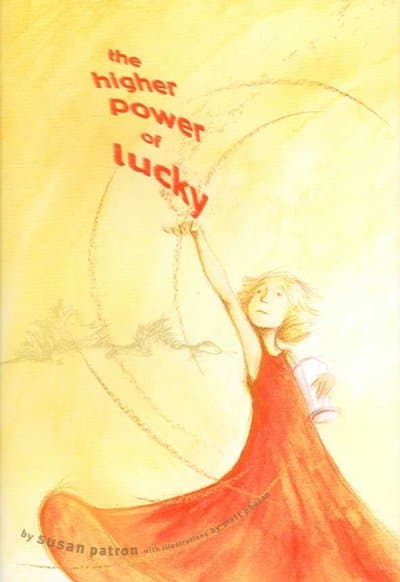 Lucky’s mother died when she was eight, her father who never wanted to be a father called his first wife to come take care of her. Brigitte traveled from France and became Lucky’s guardian in the town of Hard Pan population 43. She eavesdrops on 12 step meetings and tries to figure out how to find her Higher Power, but then as her fear that Brigitte will return to France comes to a peak she realizes you have to hit rock bottom first. This story is all about love and family and growing up even if Lucky is only 10.

Now the danger of books I read for class are that sometimes I get riled up. I am about to write an Intellectual Freedom Analysis on this book. I read the entire book wondering what this whole controversy was going to be about because I didn’t see anything. I think this quote from the New York Times article on February 18, 2007 summarizes my feelings the best. ”The people who are reacting to that word are not reading the book as a whole,” said Pat Scales, a former chairwoman of the Newbery Award committee on the use of the word scrotum. ”That’s what censors do — they pick out words and don’t look at the total merit of the book.” Also part of it is that people judge by a different scale when there is an honor like winning the Newbery involved. On the first page of the book an incident is described where Lucky can hear where a dog was bit in the scrotum. This word shows the close minded for who they are. At least it is the anatomically correct term but no it still puts people in an uproar. Quotes from school librarians and teachers saying they don’t want to have to explain it to kids and neither do their parents kill me. Patron’s response to the controversy in Publisher’s Weekly on February 15, 2007 puts it well that they have to learn sometime and wouldn’t telling them be better than them learning on their own? The word isn’t over used or grossly used and actually allows for what I thought was the most beautiful moment in the book when Lucky and Brigitte are together at the end and Lucky is comfortable and feels safe enough to ask what the word means and Brigitte tells her the truth, like a good mother! It honestly causes me physical pain that people will pull wonderful books off the shelf for one word, especially a word that children have to learn someday anyway. I think Patron truly did create an honest curious ten year old and I think the people censoring this book don’t know kids as well as they think they do. Sometimes I wonder if I have lost my mind that I want to become one of the dreaded school librarians who are renowned for their sheltering of childrens’ minds, but then I remind myself that I will not be one of them. I will be one that fights for the intellectual freedom of the next generation because if we don’t let them be free then where will the world go? Okay I am getting off my soap box now and in case anybody was wondering my adorable little mother loved this book too!