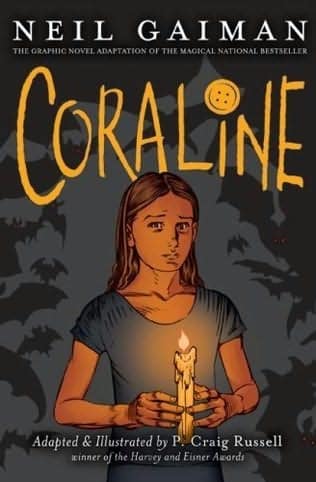 Can’t seem to get inspired on my paper so thought I would post.  I’ve done Coraline completely backwards.  First I saw the movie, then I just read the graphic novel adaptation and I have yet to read the novel itself.  Maybe I’m just building up to the best part instead of starting with the best and being disappointed by the rest.  I enjoyed the movie.  This was only my second graphic novel but it was well enjoyed.  (The first was Wolverine: Origin which is actually a collection of the comic books and I apologize to my nerd friends of that type that I cannot remember the correct term to distinguish.  Trade paperback?)  I think the theatrical part of me or maybe just the artistic appreciator loves the power of color, light and darkness, composition and other such things to add to a story.  I love the written word but a mood can be so much more quickly set sometimes with other tools.  The movie makes the whole thing goofy and the world on the other side of the door is silly scary, but the graphic novel makes it eerie and that seems the way it should be.  I think Coraline is one cool kid and I’m glad she actually looks human in this (versus the movie where adding button eyes doesn’t really seem that out of place).  My only nitpick is that the title has the i dotted with a sew-through button.  I think of sew-through buttons but the buttons are shank buttons and then when they are laying on the plate they lay flat, this is the sewer in me talking.  Overall I love it.