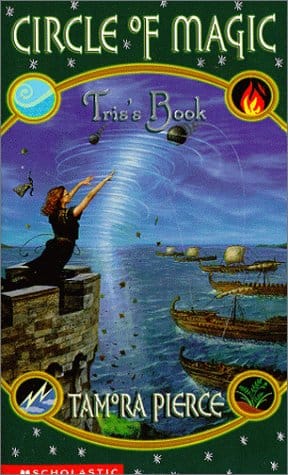 Earthquake damage leaves Winding Circle vulnerable to pirate attack, so everyone - including the young mages-in-training Tris, Briar, Daja, and Sandry - is working to strengthen the community's defenses. When Tris's cousin Aymery comes to visit, he advises the "weather witch" to return to the family that exiled her, but she doesn't wish to leave her friends to face the threat without her.

As the onslaught begins, two things become terribly clear: The priates have a powerful new weapon, and they have an accomplice within Winding Circle. But the attackers have failed to reckon with the fury of a young mage betrayed once too often and her very stubborn, very loyal friends...

I will admit that Tris is probably my least favorite character in this series. Ironically she is probably also the most like me. Though I know for a fact I would not be an interesting book character and I prefer to read about people close enough to me to relate but pretty different. The four are linked now. It shows in the littlest things. Their home is in danger and this will bring them together even more, drawing their teachers in as well. The stakes are higher, this is about more than just them. They also push their limits, but what else would we expect out of this group. We also get more background on her family and what she has been through. All of them develop. I think the most important thing that happens in this book is the realization of just how dangerous Tris is.