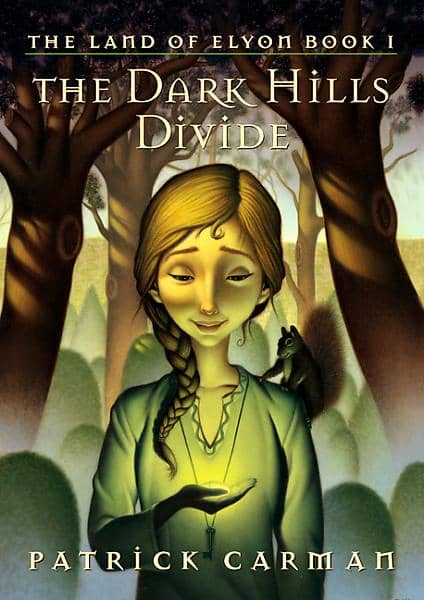 A 12-year-old girl learns of her magical destiny in Patrick Carman's first absorbing episode of the Land of Elyon trilogy. Originally self-published to local acclaim and now available on a national scale, Carman's The Dark Hills Divide introduces readers to Alexa Daley, who annually visits the town of Bridewell. Alexa is curious about what lies beyond the massive ramparts that surround the city and the walled roads that link Bridewell to nearby towns; soon after town leader Thomas Warvold passes away, Alexa finds herself outside the walls, acquires a stone with remarkable powers, and discovers that she's meant to stop a potential war from occurring. Fortunately, Alexa has a number of allies, including a fierce wolf named Darius, and after she uses her smarts to prevent a ruthless convict from gaining power, the storm facing Bridewell is calmed, with a hint of what's to come in Book 2. Fantasy buffs looking for more in the vein of Cornelia Funke and Flavia Bujour's The Prophecy of the Stoneswill find Alexa Daley to be a stellar new heroine. Told from Alexa's matter-of-fact point of view, Carman's first book is one to savor, sewing together an involved yet non-intimidating plotline, fascinating characters, and strong cliff-hangers to deliver a series debut that will surely entertain boys and girls, young and old.

This was a series that I was definitely attracted to due to the cover and then I read the back and decided like it might be my thing. Enough that I bought the original trilogy all together. We shall not discuss when said purchase was made.

I’ve been trying to weed my book collection which is something physically painful to me. There were a number of books I just had to decide that I thought I would never get to. This book was on the line and I decided it was small enough I should just go for it and then decide whether or not to finish the series.

I’m still a bit undecided. I think part of it might be that the style and language were good but not a match to me. Alexa often seemed too mature and too aware of her self and others. Not that a 12-year-old couldn’t be but it just seemed a bit much. There was a weird almost but not quite heavy-handedness about telling the truth. The environmental commentary is a bit more subtle. I loved the characters, especially the animals, but also the librarian. I liked that there was a character Alexa didn’t get along with but later she saw his value. I loved the world building and the style of writing. There was amazing simplicity and depth simultaneously.

I must confess that I am ashamed I did not see who the bad guy ended up being. I got stuck on one suspicion and thus completely missed the blatant clue that I should have caught as an adult. Also there was clue that I never even thought about considering… how to hide a brand.

This was so much just the beginning of the story. I am terribly curious about Elyon. I do also think that more and more lately my age affects my ability to enjoy a book like this that I think is good but definitely more age restrictive. I want to know what happens with the animals, what happened to the magic? I think my favorite thing about this book is that it is for a reading level where there isn’t really much like it. It fills a gap. I needed this a very long time ago. I think I will stick around and see what happens to Alexa at 13. I think I will enjoy it more if I binge read it, rather than accidentally stopping in the middle for two weeks!