The Once and Future King by T. H. White 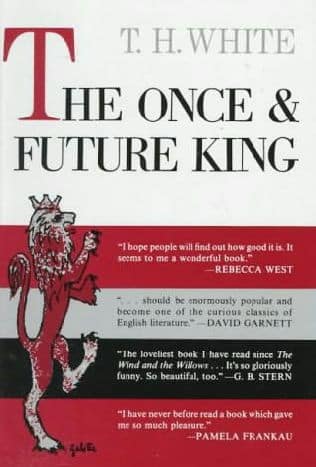 The Once and Future King by T. H. White
Format: Hardcover
Goodreads

Book 1: The Sword in the Stone: I cannot help but compare this one to the movie that sprung from it. Merlyn is just as crazy and the humor is just as wonderful. You follow the story of the boy Wart, short for Arthur and his education as he approaches manhood. The writing is fast paced and witty. The characters are so dimensional that you even feel like you’ve met the dogs. The book stands alone quite well though still leaving you wanting to know the rest.

Book 2: The Queen of Air and Darkness: This book focuses on the role of Morgause, though it actually spends very little time on the woman herself and more on the complicated ripples she causes in the world of Arthur. You see the battle of Arthur against her husband Lot as well as the trials and tribulations of her four sons and Arthur’s knights who find themselves at her castles. A bit more complicated to follow as it brings together many threads to play into the telling but in the end it is just as elegant and enchanting.

Book 3: The Ill-Made Knight: We usually get caught up in this image of Lancelot as beautiful and perfect rushing in and sweeping Guenever off her feet. White’s Lancelot is about as human as it gets. This ugly man hates himself too strongly and loves others too greatly. The world’s most famous love triangle is actually further complicated by Lance’s love for God. The book follows Lance from his teenage introduction through his late adulthood as Arthur’s best knight. Camelot is not as it once was and the people are restless led by none other than Mordred. Though the book focuses on Lancelot the looming fate of Camelot and Arthur does not look much brighter.
Book 4: The Candle in the Wind: I found it more difficult to get into this one because I was under the mistaken assumption that I pretty much knew what was going to happen. There is much more to this conclusion than you might expect. There are some long winded sections but in the end it is a necessary and touching finish, though it would not stand alone at all.

Overall I greatly enjoyed the entire book and I wish I had kept count of the number of times it came up in conversation while I was reading it. There were also quite a few times when I stumbled upon references to the text. Of course it is a must read for any lover of Arthurian legend.