Each Little Bird That Sings by Deborah Wiles 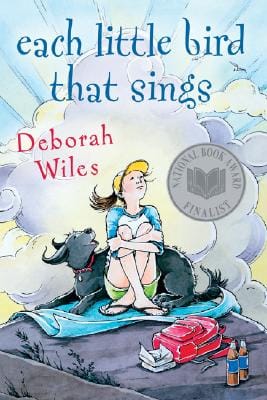 What’s a good onomatopoeia for blowing your nose?  The cover illustration by Marla Frazee is beautiful but I think the original cover that shows Comfort and Dismay in profile rather than straight on might provide a better sense of the mood of the book.  Now don’t get me wrong this is an absolutely fabulous bildungsroman (Yes, I love this word.) that deals wonderfully with the monster that is grief.  Comfort Snowberger is a ten year old force to be dealt with.  She has grown up around death at her family funeral home and she deals with it well even when those close to her great-uncle Edisto die.  That is until great-great-aunt Florentine dies and other issues arise such as her terribly annoying cousin Peach and the testing of her friendship with Declaration.  I don’t want to give things away but this book gets much heavier and more poignant than you expect when you list the cast of characters from dog Dismay to brother Tidings.  I was truly amazed at the power of this book and it was one that I had never even heard of but I will make sure others hear of it.