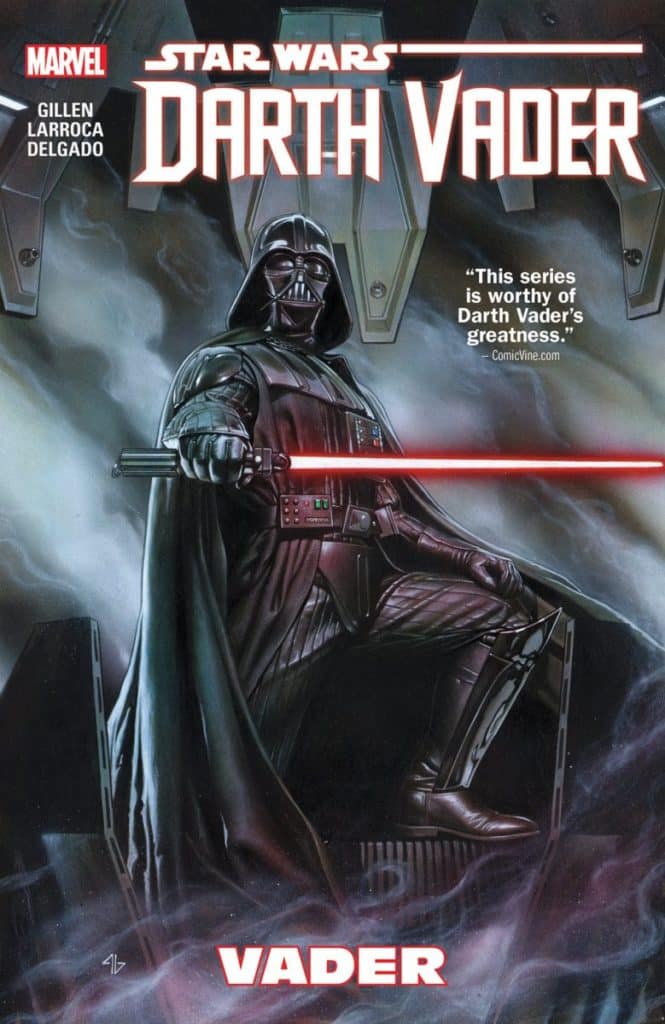 The original Dark Lord of the Sith stars in his first ongoing series! Ever since Darth Vader's first on-screen appearance, he has become one of pop-culture's most popular villains. Now, follow Vader straight from the ending of A NEW HOPE (and the pages of the new STAR WARS comic book) into his own solo adventures — showing the Empire's war with the Rebel Alliance from the other side! But when a Dark Lord needs help, who can he turn to? As Vader pursues a very personal vengeance against the Rebels and investigates the Emperor's secret machinations, he clashes with weapons scavenger Aphra and deadly Battle Droids, and returns to Geonosis to build an army. But some very powerful people don't want him to learn the truths he seeks! Guest-starring Jabba the Hutt, Boba Fett and more!

I read this series as it came out interspersed with Star Wars: Volume 1. I will admit that it is hard to imagine not reading them that way. We get to see things from a different perspective. We get to see Darth Vader’s side of things in more detail. This picks up between the two arcs of the first Star Wars volume. Vader has interacted with Luke and he is curious. Kieron Gillen presents us with a fantastic glimpse inside. We get to see more of the relationship between the Emperor and Vader, which I think just adds so much to the universe. I feel like it is an aspect that wasn’t quite what I expected but fit perfectly once revealed.

We also get to see some of what is in Vader’s mind. There are moments that are not just his interactions but what he is thinking. I like that he has secrets from the Emperor, just as the Emperor has secrets from him. Another person that we get to see another side of is Tagge, and it adds depth to both characters. There is a moment with a droid that I feel like is a good reminder that Vader is Anakin but different. Vader’s position is threatened which I think is an interesting concept I hadn’t really considered. The creations are interesting because they are the other aspect of Vader where man meets machine.

I’ll be honest while I love this series for what it shows us of Vader. I also love it because Doctor Aphra comes into our lives. I’ll gush briefly. They decided that Vader in solitude wouldn’t really work, he needed a Han Solo to his Luke, take Han and add a dash of Harrison’s Ford other iconic role, Indiana Jones, you get Doctor Aphra. She is brilliant, mischevious, ethically ambiguous. She may possibly be my favorite character in the universe. I don’t want to spoil their interactions but I will say that she does make an excellent foil to Vader. The droids are also iconic, and I think help fill out the crew.

There is a moment at the end that is shared with the end of Star Wars: Volume 1 and this version in particular significantly changed how I see Vader.