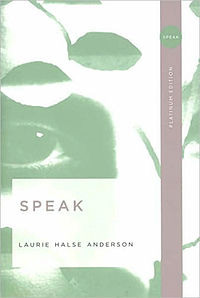 It has been discussed that spoilers aren’t that bad if the book is good because it is all about the journey.  I enjoyed Speak but I wish I had not known what had happened and so I promise I won’t slip and tell you and if I just made you curious don’t look it up, read the book!  At times Merryweather High School of Syracuse may seem more cliche than reality with it’s super defined cliques but I think the point is that is how it feels when you see yourself as the outcast.  Melinda is more normal than any teenager or parent wants to admit.  Even if things are not as bad as they are for Melinda I think there is a part of her in every teenager, I sure had plenty and I can see her in those I knew as well.  Okay so summary…  This is the story of Melinda’s freshman year in high school, but it is no fairy tale.  Something happened at a party that summer.  Something that has turned her into an outcast and caused her to stop speaking for fear the truth would spill out.  I do think it is a wonderful book that more people should read though I will admit it can be quite heavy at moments and I understand (as I’m still there) that many students want something to get away from reality rather than to make them face it.  I would definitely encourage others to read it and I will be thinking about it for some time to come.