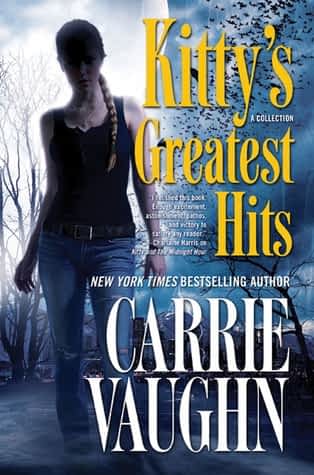 Short stories, I promise not to take too long on each.

It is a Christmas, the holiday that no one should spend alone, but Kitty is not the only one spending it this way.  She finds another of her kind, even more alone and unsure of himself.  He can’t control himself and he is dangerous.

“A Princess of Spain”

If the supernatural were real what points in history could it be credited with?  Catherine of Aragorn began as queen to Arthur but he died and she became queen to his brother Henry.  History would be very different if things had gone differently.

The Spanish are looking for riches in South America.  They are not the only force looking to conquer this land, there is something dark here as well.  Some consider it a blessing, others consider it as a curse.  Some think there is no choice to be had but that is not the case.  This is the origin story of Ricardo, known as Rick in Kitty’s time.

“The Book of Daniel”

The story of Daniel and the lion’s den is broadly known (though apparently not by my boyfriend, talk about trying to explain).  What if the supernatural were throughout everything.  In this case Daniel is a were and it makes him question his faith in god, but then when it comes time to be punished for his belief it seems that maybe god did give him a gift after all because he is a were-lion.

“The Temptation of Robin Green”

The supernatural put under the military microscope is not something you see often.  Rick makes a guest appearance as we see researcher Robin Green left alone with a new ward: a male selkie.  Robin will be tempted and her life will change, the supernatural comes at a price.  I definitely want to know more about Rick.

Cormac is seen as a teen destined to get in trouble, because no one can really understand that he killed the werewolf who murdered his father.  He cannot leave the hunt but his new life limits him.  His cousin Ben sees him on his way and goes with him.  Cormac does not expect him to stay but tonight is more important than just any hunt.

Cormac is a grown hunter, but he still lives in the shadow of his father.  He tracks the wolf into town to a Catholic school and church.  It seems as though at least one person knowns about the creature but if it once had control it is losing it.

T.J. is dying but then he sees a man who should be dead walk away unharmed.  Price offers T.J. a chance to live but it could be a curse or a gift.  The pack seeks to keep him safe but also under control.  Has he just traded one disease for another?

Kitty was not always famous, her coworkers did not always know that she was a werewolf.  This story gives a glimpse of Kitty struggling to deal with the normal world especially when no one knows her nature.  The rest are stories, this is more of a sketch of a moment.

“Kitty and the Mosh Pit of the Damned”

For someone who hasn’t read any of the actual series this is glimpse into how Kitty’s life works.  She wants to interview a band for her show but there is trouble surrounding this group, people die at their concerts and there is something sinister behind it.  Now it is here.  Jax apparently hasn’t been in the books, this makes me sad.

Another day in the life, Kitty goes to a coworker’s party but the festivities are interrupted when there is a zombie at the door.  This zombie girl was made in a mix of magic and drugs and Kitty is determined to find out who did this to her and to try and save her.

“Life Is the Teacher”

This is the story of what happens to Emma after.  Her vampire ancestor, she is descended of her both ways, has been taking care of her.  She could live this way but it is time for her to learn to hunt for herself and to learn to accept that this new life is all there is left.

This is the back story of a moment in the novel.  You always think of the brooding ancient vampire sitting amongst piles of wealth.  Kitty has one such vampire call in, but another calls in for rebuttal.  He works in a convenient store and lives a miserable life but maybe this is his chance to do something great.

In this novella we get to know Cormac even better.  He is spending some time away… in prison.  Kitty and Ben come to visit but there are problems here and  Cormac is on his own when dealing with them.  There was a woman hunter who was hung for the crimes of the creature she was after and ever since both of them have haunted this place.

I found the characters fascinating and always wanted to know more.  I think Vaughn has a gift for making her characters relatable because she is always trying to inject realism.  This makes me want to read an entire series in spite of the number of books already on my list.