Ivy’s Ever After by Dawn Lairamore 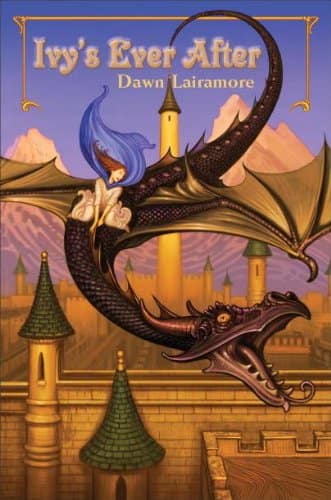 This is definitely on the younger end but when we were at ALA this one jumped out as definitely me, must buy.  I also got the sequel then so look forward to that coming soon.

Ivy has never been a very proper princess and when she finds out what is going to happen on her 14th birthday she really gets rebellious.  For generations the princesses of this family have been locked in a white tower with a dragon to guard them and the man who slays the dragon is the man they will marry.  This has kept peace with the dragons, but there is a prince who is very prepared to kill a dragon for a kingdom, and everyone else as well.

I am an absolute sucker for princesses that don’t necessarily act like princesses.  Ironically if you asked if I liked princesses when I was a kid I was like no sir, but if you asked about the right princesses… I wasn’t big on pink gowns and balls, but I was big on defying expectations.  One of the neatest things about Ivy’s story is not only does she learn to accept her own differences she realizes that others appreciate them as well and she begins to see that not everyone fits into the expectations she had for them either.  She is resourceful and the entire story is funny, not make you laugh out loud but make you smile and chuckle.

There is of course the nurse maid constantly telling her how to be proper. The king is interesting because he is a bit soft… for example his horse has become his primary advisor and is not enchanted to talk.  Though there is a mushroom loving, mortal world hating goat with an attitude.  The dragon is a bit small and more than a bit nervous.  There is a fairy god mother who is quite the flirt but also good-hearted.  There is a woman in the woods who reads tea leaves.  Oh and you can’t forget her two best friends in the castle one who is adventurous and the other who is timid.  You would not have this story without the greedy prince, who comes in a ship of bone and wants this kingdom and much more but doesn’t care about the people in it.

I’m trying to do more than simply squeal, “I loved it!” but really that is the gist.  Characters with a good archetype base that pleasantly surprise you.  Good clear world building for something so young.    Lots of positive messages about destiny and the future and self-worth slipped in there.  The cover is practically perfect.  Someday I want to make a book list of not so proper princesses arranged by age and this definitely goes on it!