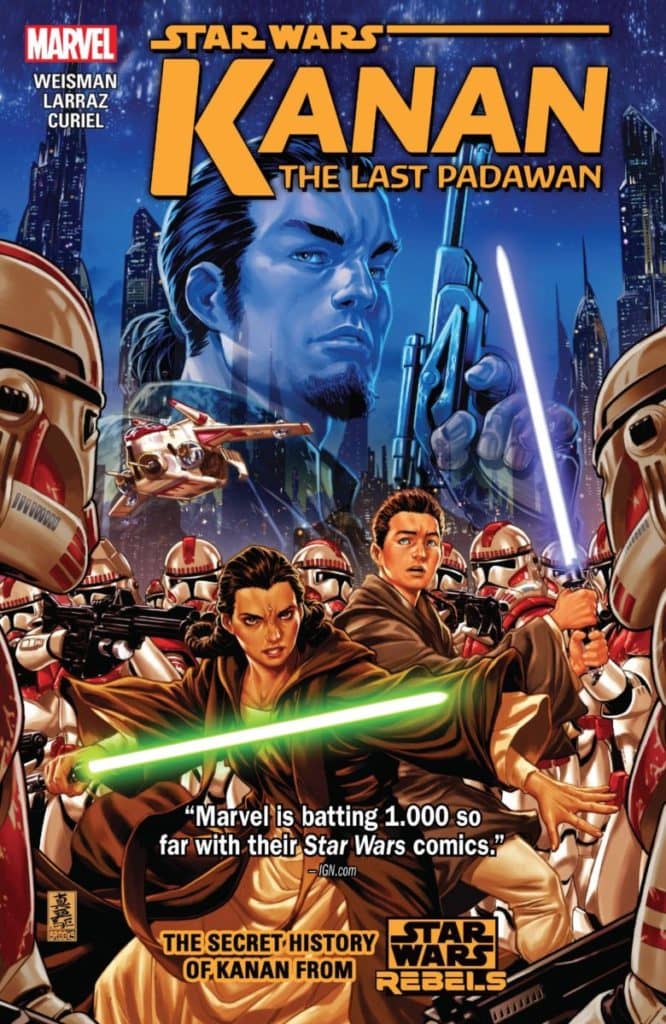 In Star Wars: Rebels, Kanan Jarrus is a cocky, sarcastic renegade fighting the Galactic Empire alongside the ragtag crew of the Ghost. But years before, during the Clone Wars, he was known as Caleb Dume, a Jedi Padawan training under Master Depa Billaba. Neither master nor apprentice ever suspected that their “loyal” Clone Troopers would turn on them upon the issuing of Order 66 — the Emperor's directive to execute all Jedi. How did Caleb Dume escape the Jedi purge? How did he learn to survive on his own after his master fell? And how did he become the man we know as Kanan Jarrus? What can a Padawan do when being a Jedi makes him a target? Join young Caleb for a tale that bridges the years between the Clone Wars and Rebels!

A lot of comics bridge between the movies especially the primary films. This series has the unique role of bridging between the TV series. It begins with where we are most used to, Kanan Jarrus on the ghost. A planet is mentioned, one that he is visited before and that is how we come be 15 years earlier and meet Padawan Caleb Dume back during the Clone Wars. The action sequences are gorgeous. Especially if you have watched Rebels you will appreciate how much young Caleb makes you think of Ezra Bridger. The relationship between Caleb and his master, Depa Billaba, makes you respect her but also ache for the young man who you know will face such hard things to come. It is not an easy road from the identity of Caleb to Kanan.

You know what will happen here. A moment of terrible heartbreak across the galaxy, Order 66. The fact that they have no choice does not make it any easier to watch.  So Caleb is left on his own, something he has never dealt with before. He has to survive somehow and he finds a very unlikely friend. Though he ends up something very different than a Jedi. The enemy of my enemy is my friend is a hard way to live but it serves him surprisingly well. The issue of the clones hunting him is resolved and it is such a moment. Then we are jumping back to the Ghost where Kanan is surrounded by people he loves but on the way to a planet he hates. This volume actually ends on a bit of a cliff hanger.