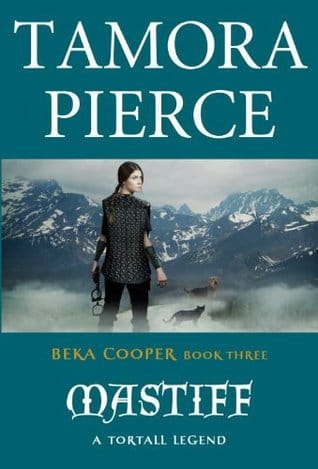 Beka Cooper is on the hunt again, whisked away to an unknown location to face the horrifying realization that no one is safe. Beka doesn’t care how important people are just that there is a little boy who has been stolen from his mother and that she needs to find him. Searching with her partner Tunstall, her scent hound Achoo and dear old constellation cat Pounce, she will cross Tortall to find him.

I will give you a warning if you’ve read the rest of the series, don’t freak out when you start the book. You did not miss a book. You did not forget something major. Big things happened in Beka’s life while we were away and we only get the after effects.

One major difference between Beka’s series and other Tortall books is that the cast is not as consistent. Originally I thought Rosto would play a major role in the entire series but that has not been the case. Beka has a core group of friends but we don’t get to spend as much time with them. Though I also enjoy Beka’s ability to find interesting new people wherever she goes. Though there are always the pigeons to keep her company. I still have a hard time thinking of Pounce as anything other than Faithful.

This book was heartrending in a good way. The beginning surprise I mentioned earlier brings up all sorts of complicated emotions. You share Beka’s impatience because this is a much longer hunt over a greater distance and you know that boy is in pain out there. The ending… well really the twist made me cry a ridiculous amount. I think it may be the cruelest thing that Pierce has ever done. As I considered the possibilities I refused to believe it until it was undeniable… I’m getting kind of hinty so I shall move on. I hate seeing Beka go, while I like the idea of Numair and Maura books, I feel like Beka is somehow the end of an era. It is also the push for me to finally get caught up on the Circle Universe.

Much of the Tortall universe shows the better side of people with the occasional truly bad person. Beka’s entire series has given us a harder look at the darker side of this beloved country, but I think this book does so even more than the previous entries. There is not a clear line of evil but rather there is greed and corruption. I really can’t say anymore without feeling like I will spoil something so I will live you, hopefully curious.