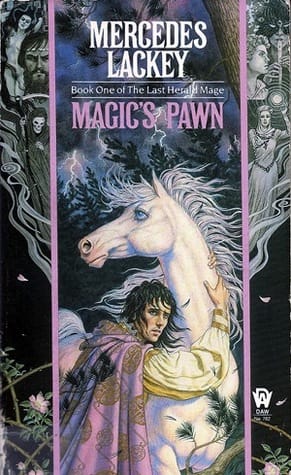 Vanyel dreams of being a Bard but as his father’s first born son certain things are expected of him. He does not take after his father and finally his father sends him to Aunt Savil to be put on track. What happens next, no one would have expected but suddenly Vanyel has a great and terrible power and it must be brought under control or everyone around him might suffer the consequences.

A lot happens in this first book. I suppose a lot happens in most of Lackey’s books thus why you can hardly get to the meat without giving spoilers. The first part of the book is spent in the Ashkevron home, a place where Vanyel does not fit very well. While he could do things better the situation is all together a bad one. Then he is sent to live with Aunt Savil and she is more sympathetic to his plight then Vanyel’s father expected. Vanyel begins to discover himself but he cannot stand on his own to feet. He falls in love and then… something happens and Vanyel suddenly manifests power that baffles the Herald Mages. He is dangerous, but also valuable. This is very much just the beginning of Vanyel’s story.

I’m going to blatantly address this so that I’m not accused of skirting around it. Vanyel is gay. He doesn’t know it to begin with, though his father suspected. He didn’t even know such a thing existed until he came to the city. This book is not about being gay. Yes, Vanyel faces some additional challenges because of it but the story is about much more than his sexual orientation. This fact fits with Vanyel, with the story. It’s not just thrown in there for shock or sympathy value. Yes, this book could have been written about a straight man but Vanyel happens to not be. Personally I think it is handled pretty well. (It was first published in 1989 in case you were wondering.) When I read this in middle school it was my first exposure to a homosexual character. At the time I did not anyone who was homosexual. I credit the handling in this novel with the fact that though relatively sheltered I accepted that this was just part of the character without taking it to an extreme.

I loved this series the first time and I still love it. That is what matters.