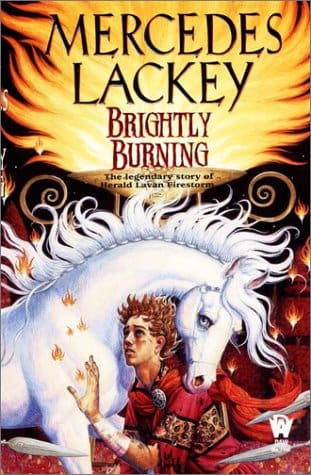 Vanyel feels older than he is and now instead of being on the front lines he is trapped in duties of court. So many have died and will die. He keeps becoming more alone but there are those who love him who refuse to let him cut himself off. Everything has a cost: freedom, love, and magic. Vanyel has done so much but his losses and sacrifices are not done yet.

Even worse than reviewing the second book… reviewing the third book. This book is about a lot of things. Vanyel’s life and legacy, the characters we have grown to care about, the war… More than anything this is the end of Vanyel’s story. This bok is filled with extremes of sad and happy. Ahhhh I don’t want to give spoilers. I love this series. It is very character driven, something that not everyone enjoys but I truly do. It helps that Vanyel’s life is a very interesting one. He is extra one of a kind even in the end.

The title of this book says a lot about Vanyel’s life. There were good things but Vanyel ultimately pays a high price for his power. He has always paid a high price really. There is one thing I have to talk about at the end of this series because it is the Last Herald Mage series… now why it is called this is explained in the end and it makes total sense… for the moment. Except the reasoning never really carried into the future and so when I read further books this always bothers me… I’m trying really hard not to give spoilers. Anyway any insights would be appreciated because I feel like really I am just missing something.