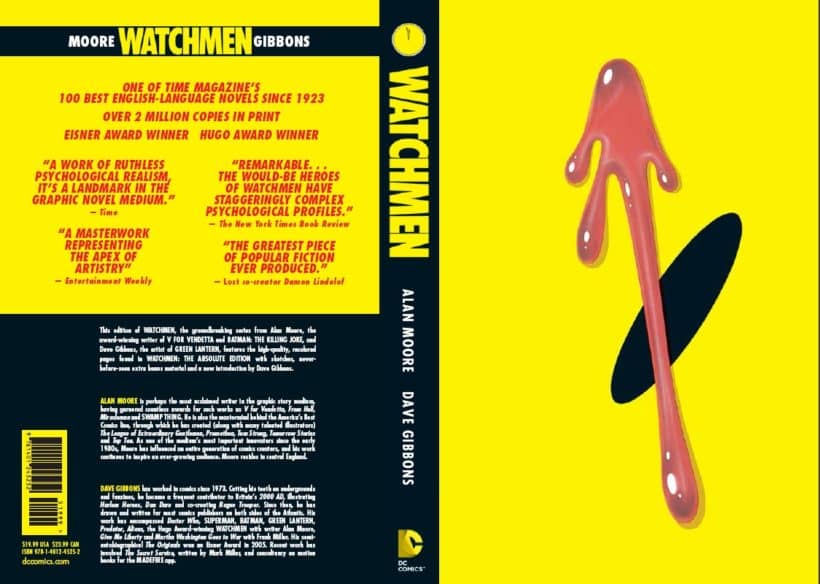 Considered the greatest graphic novel in the history of the medium, the Hugo Award-winning story chronicles the fall from grace of a group of super-heroes plagued by all-too-human failings. Along the way, the concept of the super-hero is dissected as the heroes are stalked by an unknown assassin.

It actually worked to my advantage that I had not watched the film since the night that it premiered. While I enjoyed the film I was glad to have a mostly fresh slate when reading the source. I’m always good at saying really insightful things at Acme Comic Book Club and then I forget as soon as I leave, especially when I’ve been procrastinating on blog posts. I had managed to forget the twist at the end, really the only thing I remembered was the identity of a certain ginger. I think that perhaps Watchmen is not a young man’s book. The movie premiered when I was a senior in college and the die-hard fans I went with were young, but the story struck something deeper with me now that I am older. My empathy for the plight of Dan/Nite Owl and his struggles with identity is a thousand fold what it was 8 years ago. We talk about the darkness of this story but I think what makes it so terrifying is that it is not the darkness of an unknown evil, most of it is the darkness of everyday lives. Yes, you have costumed characters, some of which have special abilities but the power of this book is that it focuses on the humans under those costumes, made all the more stark by the contrast of Doctor Manhattan. I did not expect the amount of raw emotion in the book. While I feel the movie was faithful to vignettes throughout the book, as I read scenes came back to mind in full detail because of the accuracy, but where the movie cannot compare is in the depth of the characters and the relationships there. Did I love it? Absolutely, even though it made my heart hurt.