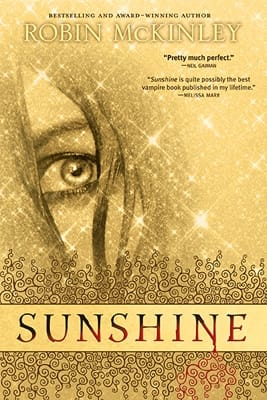 Ever since I was a little girl I have loved vampires.  I have no idea why.  I do not think I ever read anything about them and yet they were in my mind often.  I once wrote over 300 handwritten pages about a vampire heroine and then threw them away.  I never really sought out vampire books even. Someone offered me a Charlaine Harris and I read it but it was not “my” vampires.  I read Twilight and all faith in vampires was lost.  I read Dracula and The Historian and then I felt somewhat restored, but Stephenie Meyer continued to conquer the world.  If I had found Sunshine before Twilight I would have been happier. Why didn’t Rae take the world by storm?  Was it really the fact that Con doesn’t glitter or was it simply the fact that she was a bit too old a protagonist for it to be “really” YA?  We need more of these vampires is all I have to say!

Rae “Sunshine” Seddon was born Raven Blaise, but she has lived to the age of 25 without that having her family’s magic handling legacy take too much effect.  The she goes out to the lake and is taken by vampires, but with the magic her grandmother began to train her in years ago she escapes with a fellow prisoner, who just happens to be a “good” vampire.  At first this world seems familiar but it is a modern place where magic exists on the surface.  It is crafted with detail and grounded in familiarity.  Rae is human and her struggles are both grand and filled with small efforts.  I can see where people would want sequels but I can also see how this is the story and the rest is there.  You don’t know if Rae will marry Mel or have the first human vampire romance, but you know that they will fight for what is good and you hope that they will succeed.