The Serpent’s Shadow by Rick Riordan 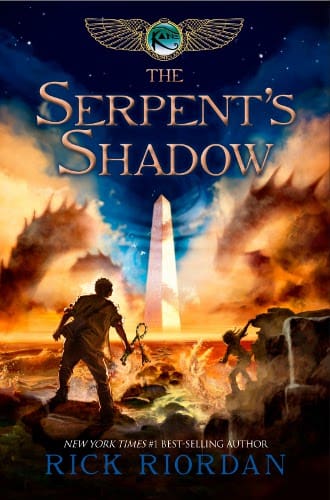 He's b-a-a-ack! Despite their best efforts, Carter and Sadie Kane can't seem to keep Apophis, the chaos snake, down. Now Apophis is threatening to plunge the world into eternal darkness, and the Kanes are faced with the impossible task of having to destroy him once and for all. Unfortunately, the magicians of the House of Life are on the brink of civil war, the gods are divided, and the young initiates of Brooklyn House stand almost alone against the forces of chaos. The Kanes' only hope is an ancient spell that might turn the serpent's own shadow into a weapon, but the magic has been lost for a millennia. To find the answer they need, the Kanes must rely on the murderous ghost of a powerful magician who might be able to lead them to the serpent's shadow . . . or might lead them to their deaths in the depths of the underworld. Nothing less than the mortal world is at stake when the Kane family fulfills its destiny in this thrilling conclusion to the Kane Chronicles.

Already we are at the end… there is potential for more. Riordan always leaves himself with many doors open (this series does include references to “other” gods in Manhattan). The humans are on the verge of a civil war and the gods are not very happy with Brooklyn House either. Ra has not turned out to solve everything as easily as expected. Lost magic is a shaky hope and the romances are pretty unsteady as well. The resolutions of everything are interesting. Zia plays an important role, everyone does. This would not succeed without team work. Weirdest thing… the resolution to Sadie’s love triangle.