The False Princess by Eilis O’Neal 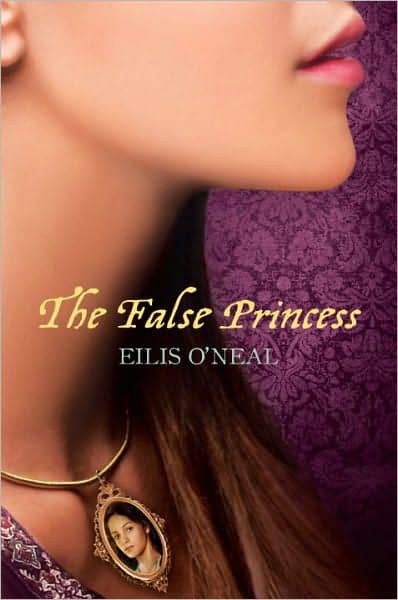 I slept a maximum of four glorious hours last night.  That was knowing that today I would come to my internship from 9-1 and then have a gap before going to my other job from 6-11.  Now why would I sleep so little when I knew I had a long day ahead?  Last night around 11:30pm I asked when we were going to bed and he said he might read so I picked a new book to start.  I did try to fall asleep at some point but it didn’t work the book was too present in my brain so I snuck off to read a little more and finished it around 4:30am.  I suppose that is part of the danger of reading things directed at young people (this one is supposedly 12 and up but personally I always fall into an and up category) because I know I can usually finish them and still sleep at least some.  How can I recommend a book more than saying I read it even when I needed the sleep most desperately?

Congratulations to the blurb writers.  You intrigued me without giving away too much.  Often of late I feel like I’m given the whole book so I can decide if I like the whole idea or I’m given the movie trailer version chopped together in a way that makes it a completely different story from the actual book.  You did not mislead or spoil!  So in turn I will attempt not to spoil.  I’ll admit I was caught even by the concept as presented in the title.  Nalia is princess of Thorvaldor or so she thought but actually she is Sidna, a commoner who replaced the princess to protect her from a threat on her life.  Now it is time for the princess to return and Sidna has to relearn how to live.  When Sidna reached her aunt’s I suddenly realized that I had no idea what was going to happen next (an excellent feeling in case you were wondering).  Sidna has been torn away from everything she has ever known and you might think that would be enough twists for one young woman’s life but it does not stop there.  The twists and turns just keep coming.

I suppose for a moment I will return to the recommended age 12 and up, which is interesting because the protagonist is 16 and a lot of times the range tends to center around the protagonist age.   I think protagonist determining recommended reading age has always been silly.  In this case I think part of the reason is that the story is interesting but not complex.  I believe readers younger than 12 could follow the story but not all of them appreciate kissing yet.  Kiernan and the others are likeable and imperfect but I would not call them round or dynamic.  I sniffed a bit near the end but more developed characters easily have me bawling.  Honestly though she was consistent and it was good enough that 12 and up could read it and be interested.  I mean really once again it kept this 24-year-old up into the wee hours, though I also have a weakness for instant gratification.  This one goes in the keep pile and I will be keeping an eye on Eilis O’Neal (First name pronounced A-lish if you were wondering).