The City of Ember by Jeanne DuPrau 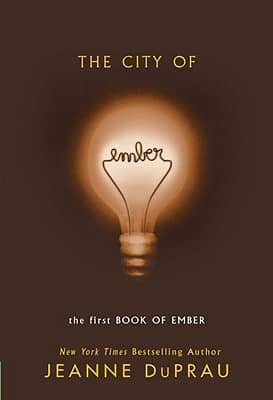 The City of Ember is all that they have ever known.  The electricity that keeps the dark away is failing but no one knows how to fix it.  Lina and Doon are twelve years old and beginning to work and realizing that the City has more problems than they realized.  Lina finds instructions that she thinks are the key but so much has been forgotten.

Here you have characters that have never seen the sun.  Generations that don’t know the meaning of the word tree.  DuPrau published a dystopia several years before most people knew that word.  Though the protagonists are young in years they are grown based on their society.  They have their moments of immaturity but Lina especially is used to being an adult.  Supplies are running out and those who should be working to protect the people are corrupt.

The removal of knowledge is an interesting concept.  It is explained how it was done so thoroughly but not really why?  Was it to prevent them from wanting to leave or to eliminate all memory of the history that led to the need for such extreme measures.  I do think the loss of knowledge was more than they expected.  I do think it was terrible planning on the part of “The Builders” to only make a single set of instructions with a single delivery method and no fall back plan.  They had it so carefully timed and we are not even sure exactly how long the city has lasted past that expected date.  Are there further instructions somewhere that we have not yet discovered yet?  This book definitely leaves you with a lot of questions.  I think the most interesting thing about this series is how and what the characters will learn.