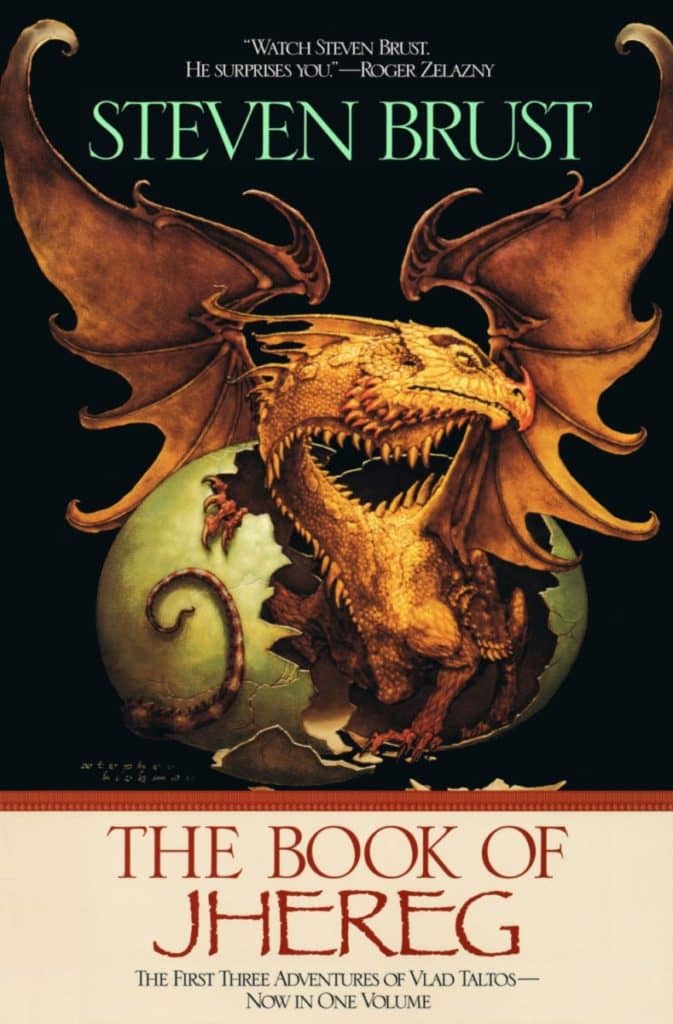 The Book of Jhereg by Steven Brust
Format: Paperback

There are many ways for a young man with quick wits and a quick sword to advance in the world. Vlad Taltos chose the route of the assassin. To his other qualifications he added two things: The first was a smattering of witchcraft–badly thought of on Dragaera, but only a fool refuses such a weapon...

The second was his constant companion, a young jhereg, its leathery wings and poisonous teeth always at Vlad's command, its alien mind psionically linked with his own. Vlad has never regretted the sourcerous bargain he made with his jhereg's mother: "I offer your egg long life and fresh, red meat without struggle, and I offer it my friendship. I ask for aid in my endeavors. I ask for its wisdom, and I ask for its friendship."

Jhereg: This is your introduction to Vlad Taltos. It includes his very unique wife and incredibly unique friends. Vlad is a boss in the organization, which is pretty much the only criminal organization… which is slightly separated from the Jhereg which he owns a title in, even though he isn’t a Dragaeran, because you can do that in the Jhereg. That is the House of Jhereg versus the actual winged species of which Vlad has a familiar. Honestly I find it hard to even explain what a Dragaeran is without getting into details that might be considered spoilery. Brust manages to explain this entire world fairly effortlessly. Sometimes you are left curious but you can rest easy knowing that he will explain it at some point. Each volume is another piece in the puzzle but the sequence also makes it interesting… Vlad is also an assassin, his wife a retired one. This volume focuses on that role because he is trying to take out a target in almost impossible circumstances.

Yendi: Here we jump back in time. Vlad is still new to his role as boss. We learn more about how he came to rise to the position along side loyal Kragar. Kragar is probably one of my favorite characters because he is not at all what you expect and I hope that someday we find out his history. This is a tale of war and death and love. Not many men could love a woman who killed them. This universe is filled with plots. The politics are quite complex but the machinations make them even more so.

Teckla: Jump into the future, past the first volume. Now we know how Cawti and Vlad came to be together, so now we will tear at that relationship. Cawti has been keeping secrets and then a man she knows is killed. He is an Easterner like Cawti and Vlad. The group of Easterners could put a rift between our lovers. Cawti is changing and Vlad does not do so easily. Yet Vlad always adapts, just not necessarily as you would expect.

I had read this volume before but it felt fresh. I suppose partially because I last read it pre-blog. I am already into the second volume. I think the best way that I can phrase it is… this world is wonderfully elegant and yet equally coarse.