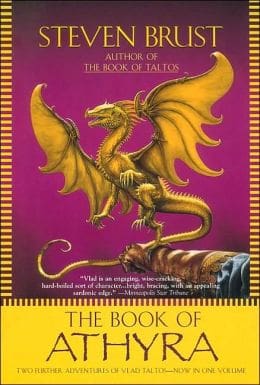 The Book of Athyra by Steven Brust
Format: Paperback

The Book of Jhereg and The Book of Taltos collected the first five novels of Steven Brust's highly imaginative fantasy series that Locus praised as "entertaining and worth reading." The Book of Athyra features books six and seven in the series: Athyra and Orca.

Vlad Taltos is a sorcerer and assassin without peer, as deadly at spell casting as he is with sword wielding. Accompanying him on his journeys are two leathery-winged jhereg who share a telepathic link with Vlad and triple his chances against even the most powerful of enemies.

In Athyra, Vlad finds he's ready to retire himself and his jhereg companions, but the biggest hitters of the House of the Jhereg have something else in mind. In Orca, Vlad must repay a debt to a boy who saved his life, even if it means breaking a financial scandal big enough to bring down the House of the Orca, and possibly the entire Empire.

Vlad is out of his normal environment. Instead of being a powerful assassin and a member of a criminal organization. He is alone, far away from his big cities, with only his jhereg companions.

Athyra: Vlad Taltos doesn’t believe in coincidence so when a man that he once knew dies just as he arrives in a small town, where no one should expect him, he becomes suspicious. He befriends a local boy, Sven, to help him. Sven is learning to be a healer, so the contrast to Vlad is interesting. He has family and other duties but he is drawn to Vlad regardless of the skepticism and outright suspicion with which the other villagers view Vlad. Never before has Vlad so desperately needed help. We see him at his most vulnerable. Even Rocza warms up to Sven eventually. Vlad must hunt a man for the second time.

Orca: These two pair very naturally. Vlad is still traveling with Sven because something happened at the end of Athyra. Sven was left damaged. You couldn’t be sure if it was physical or mental or both. So he finds a woman who can help but she also needs help of her own. She is in danger of losing her home so they make an arrangement to help each other. Vlad calls in an old friend and it is so good to see a familiar face. Kiera is a cool character that we don’t get to see a lot of, so it is nice to see some more of her. The novel is mostly told as an almost retelling of the events to Cawti. You learn some very exciting things, about why Kiera introduced herself to Vlad to begin with and a little of what Cawti has been up to in his absence. Don’t expect any overly happy endings but it is very interesting.