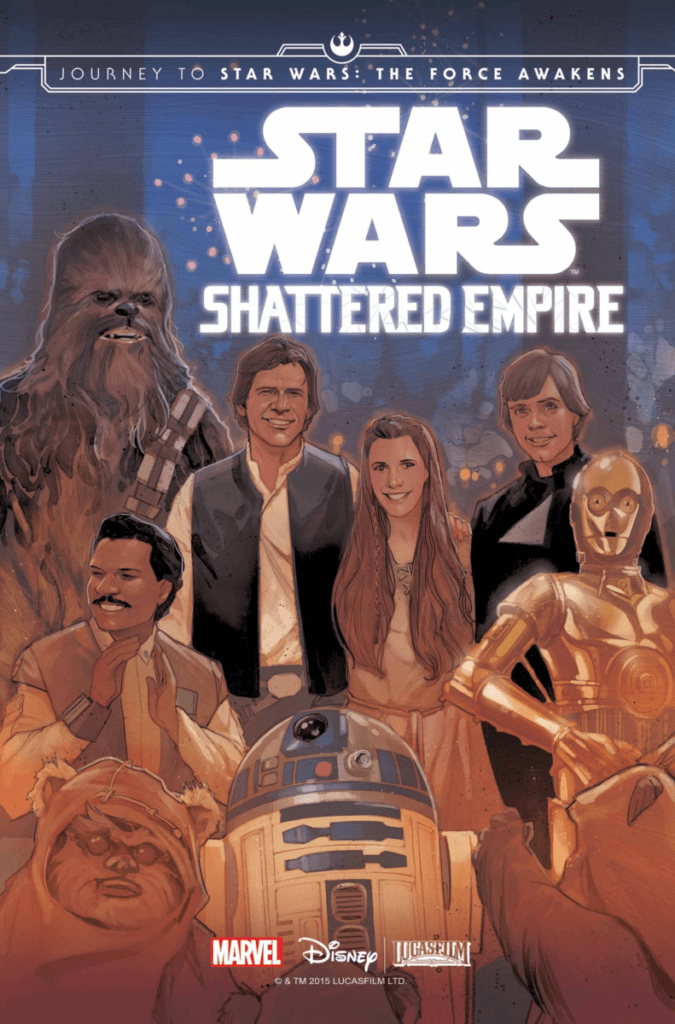 Journey with us into the time after the end of Star Wars: Episode IV Return of the Jedi! Writer Greg Rucka and artist Marco Checchetto take us past the destruction of the second Death Star--and into the chaos of a shattered Empire. Everything you need to know is right here!

With the old cannon it was hard to decide where to begin. Even now that there is new cannon and things are starting from scratch it is still hard to decide. Shattered Empire seems like the perfect place to me, especially in the comics. The full title is Shattered Empire (Journey to Star Wars: The Force Awakens) which I refuse to use because it is such a mouthful, but the “Journey to” titles tend to build bridges between movies. In this case it brings you from Return of the Jedi to The Force Awakens.  As Star Wars often does it follows a family but in this case it is not so much the Skywalkers, though they do make an appearance, instead it follows the Damerons.

Shara Bey and Kes Dameron, pilot and pathfinder, wife and husband, parents to Poe Dameron. These are just some of the people who fought to destroy the Death Star. This is a book about what happens after. Of course there are questions that will make you wonder. For every question answered, a new one is asked. You can feel the universe expanding. I don’t feel like it is so much a single story but a glimpse of a larger story. I think a lot about Poe growing up after this book, especially with a certain something that gets planted at the end. The usual cast is around but it is nice to see them interacting with a larger variety of people. I would say that this book does not have any earth shattering revelations but especially if read closely there are a lot of details that update you on places you’ve been before, or things that might be yet to come. The art is absolutely gorgeous, to the point that I want to touch the page.