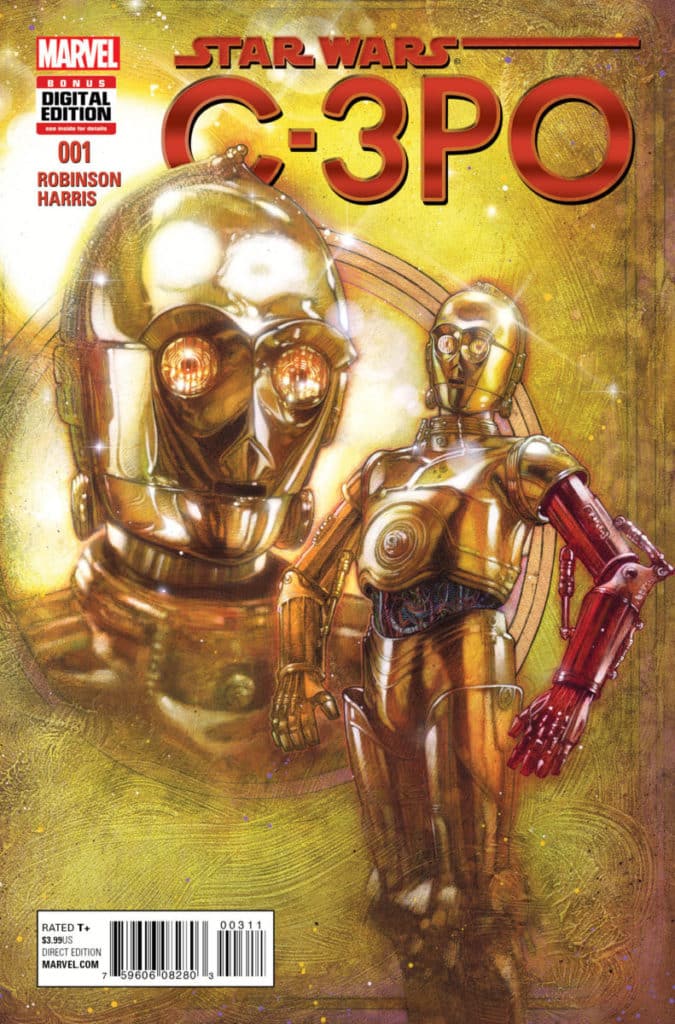 Star Wars Special: C-3P0 #1 will reunite the acclaimed and award-winning writer and artist team of James Robinson and Tony Harris for the first time in nearly two decades, the tale follows “golden rod” on a solo adventure leading up to his appearance in Star Wars: The Force Awakens — and reveals what led to this change in appearance.

“That’s a really exciting part of doing this story,” says Robinson. “I saw a photo of C-3PO with his red arm the other day and I thought ‘Wow, I’m the writer who gets to explain that.’”

You may not be fluent in over six million forms of communication…but this book is a must have in any language.

I love droids. Such that I have a whole shelf of droid action figures. I love Star Wars droids especially, but I don’t discriminate. My office has an assortment of droids from various fandoms. Now I’ll admit I have a tendency to pick on poor 3PO because I love me some R2. I was initially skeptical about the art of this book but it grew on me. I like that it is different because it is a different kind of book. It’s not your standard Marvel or Star Wars but it has a richness that I really enjoy. Heavier lines, that are more like what I want to hang on my walls. The colors as well just make the whole thing pop. 3PO is stranded with a group of other droids and I think it really emphasizes to him and to the reader how he and his usual companion are not the same as other droids.

This is the story of how he got his red arm that you see in Episode VII but they made it so much more. A hostile environment, a fight for survival, unlikely allies… I have a lot of droid moments I love, but none of them have made me empathize quite so much especially with 3PO. I also think it is interesting the idea of mortality especially for a droid as old as 3PO. Something that is addressed in the expanded universe in the comics and in the animated shows is the idea that we’re all people, or in this case droids. I never would have guessed that this book would make me cry like a baby, but it did. I always wonder about the development of droid personalities as their memories are not wiped and this issue explores that in several ways, from the perspective of one who knows he has been wiped and seems to almost lack a sense of identity because of it. In contrast of course you have our dear goldenrod who remembers so much to the point of keeping a red arm as a sentimental gesture. It makes me kind of sad to know that the arm will go away some day, but I suppose it is C-3PO and we can’t expect him of all droids to keep his limbs attached!