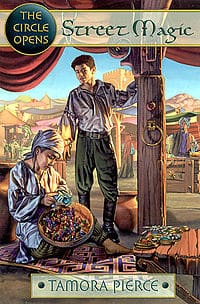 It's been four years since Briar Moss began his training as a plant mage, but he still hasn't put his past behind him. Wandering through a Chammuri market, Briar comes across a street girl using powerful magic to polish stones for a merchant. He resolves to find her a teacher. But Briar understands the city's gangs as well as he understands Evvy, the young mage. When gang warfare breaks out in Chammur, Briar discovers that the fiercest gang is seeking a stone mage to lead them to hidden gems. Briar once believed gangs offered protection, but now he and his mage may offer the only protection Evvy can count on. As Briar is swept up in a bloody conflict, he must decide whether he's ready to make the final step away from his former life as a "street rat."

Briar and Rosethorn are both a little rough around the edges, so it isn’t surprising that in a strange city on their own they would get into trouble, especially because Briar gets involved with the local street gangs. I found myself wanting to shake him several times, but that is why he has Evvy, the girl he saw doing stone magic in the market. She is stubborn and resists him at first, but she may actually be the easiest to like of anyone in the series. She is cautious and wise for her age. Even Rosethorn warms up to her more quickly than you would expect, but a stone mage can be valuable and the only other one in the city is at the palace. There are those who should help Evvy that want nothing to do with her and scary people who want to use her. In the end though the biggest lesson is that no one should mess with Briar’s friends. The end is quite impressive. You kind of want to dodge plants for a while after reading it. The stakes felt so high in this one and Briar definitely struggled with being a teacher even more than Sandry.