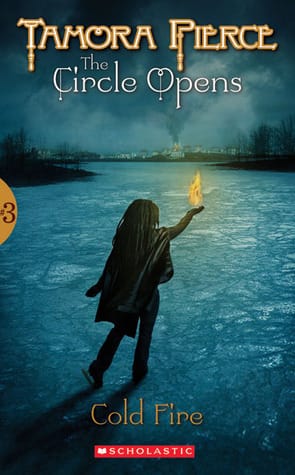 Daja and Frostpine expect to have a peaceful winter's visit with old friends in Kugisko, a port in the vast empire of Namon. But there is no peace when mysterious fires begin to blaze across the vulnerable city. Daja assists Bennat Ladradun, a local firefighter with a tragic past, to fight the flames. The two become fast friends-until they realize the fires have been deliberately set, and their relationship is deeply tested. Daja's magic helps her track down the firestarter, but no magic can protect her or Ben from the effects of madness and betrayal.

Daja has gone North to the land of the cold. It doesn’t bother her much but Frostpine does not enjoy it much, in contrast to his name. They are the guests of his ex roommate and his ex girlfriend that became his friends wife. They have a sweet little family with two young women, Daja spots magic in one of them and as twins that means they must both have it. Once she has identified the type of magic she has to find them teachers. You have a feeling that the choices they make will be interesting. Daja also makes a new friend in Ben, he has no magic of his own but he learned about fighting fires from one of the greatest smith mages. Fighting fire is important in a city made all of wood but some of the fires are being set. There is betrayal here and they let you know what it is early on. It made it all the more painful and believable. Sandry and Briar are still with their students but Daja leaves her students which makes me curious about the future books. Tamora wrote this betrayal before the Tortall betrayal. The other is still more painful to me, but this one was a more drawn out, a different kind of pain. I’m always curious about silly things like Daja’s other living metal creations, has she made any more growing ones, but that is a different magic than her skin metal. I like the contrast that the twins provide. I also just enjoy the variety of magics in this world. The coexistence of ambient and rune magic for instance.