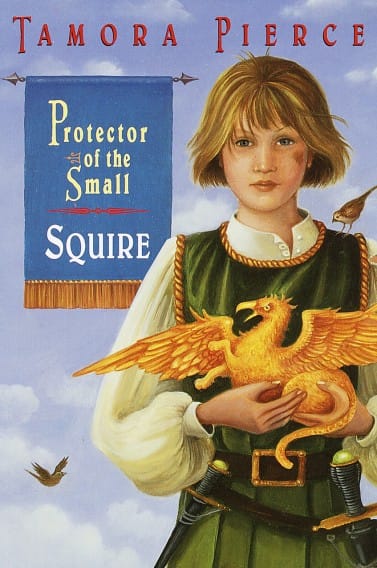 This volume always feels like the time flies by even though it is longer to account for the four years as a squire.  The book opens with Kel stressing over having not been chosen as a squire, but that is quickly remedied when she is chosen by Lord Raoul and so she continues her adventures with the King’s Own.  It always baffles me looking back that the griffin is only in Kel’s life for less than a book because the creature is definitely a presence. (I don’t quite consider this a spoiler as it is depicted on the cover in her hands.)  Obviously I love Pierce’s writing and story lines but I do have one quite fussy objection at the very end of this book.  Up until this point Kel is a very self driven character without any of the meddling gods seen with Alanna and Daine and it is one of the reasons I love Kel.  So I am always disappointed when the Chamber of Ordeals decides to give Kel a vision similar to the one handed to Alanna, pointing her in the direction of what needs to be done.  It seems unnecessary when she has already begun to encounter the problem.  Though honestly once I am into Lady Knight I almost forget this was done so really it doesn’t matter.