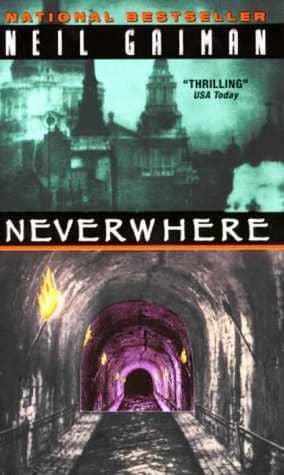 Richard Mayhew thinks that he has a pretty good life.  He has a decent job, a beautiful fiancée and is mostly okay with everything.  Then he skips an important dinner to help a girl bleeding in the street.  In a blink that life is completely gone and Richard is part of London below.  Trying to help a girl named Door and he will play a larger role than anyone would expect.’  Here time and space and reality are not what we know.

I’ve read this before.  It has been a while though.  Every word Neil Gailman writes is so carefully chosen and enchanting.  I’ve been trying to pay more attention as of late to quotes that catch my eye.  Take this one for example from page 307 of the Paperback (ISBN 9789389789016):

“He had gone beyond the world of metaphor and simile into the place of things that are, and it was changing him.”

I find this sentence absolutely breath taking and I think what I love in this sentence is a lot of what I love about this book.  Richard is constantly trying to apply the rules of London Above to London Below, because that is what is “real” but in some ways Below is so much more real, so much plain more.  Each character is so vividly portrayed.  I had forgotten much of the book, something I consider a blessing because it means I can truly appreciate it all over again.  The pain of betrayal, the odd beauty of Door’s eyes, a world stretching from the tops of the buildings to the deepest sewers, so many wondrous things and yet in the end Richard is quite possibly the most wondrous of them all.

I love the ending of this book.  I think that in reality a great many of the protagonists dropped into fantastic worlds would want to go home…  I won’t give spoilers though.  I think Gaiman’s love of London shines through, as he takes us through forgotten Underground stations and other bits of London, past and present, lost and forgotten.  I also think that you can imagine both worlds tumbling on, hardly noticing what has transpired as epic as it may seem.  Gaiman does not feel obligated to explain every detail of the world he has created, there is just the right balance to give it a life of its own.