Here, There Be Dragons written and illustrated by James A. Owen 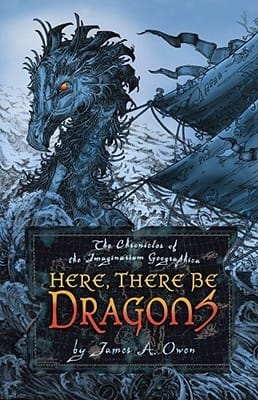 Here, There Be Dragons by James A. Owen
Series: The Chronicles of the Imaginarium Geographica #1
Format: Hardcover
Goodreads

There is another world, that we think of as only myth and legend, but it is real as is the danger looming over it.  The year is 1917 and three men find themselves charged with protecting the Imaginarium Geographica, which holds the maps of all the mythical lands and a great many secrets.  Friendships are forged and tested but this is just the beginning.

Ben was using the computer while I read this book.  This is a good thing because otherwise I would have been Googling everything.  Part of me still almost wants to skim through the whole thing again with Google at my finger tips.  There is so much detail woven into this book.  It is a haven for nerds.  Some things click immediately, others you wait for the reveal, and others… you will want to Google.  I think each person probably sees and appreciates certain parts of this differently.  If you need deep story driven plots, this is not the book for you.  This is a romp through fantasy land.  The characters are likable, the main one who fell flat for me was Jack.  I wanted to throttle him but his obnoxious behavior didn’t feel natural.

In some ways the book mimics a classic epic.  I think that a better nerd would have realized the identities of our protagonists before the reveal.  Though the fact that I hadn’t even tried to deduce made the moment all the more fun.  I think it is interesting that even the youngest of the protagonists is still by rights a man.  I don’t find this a negative, just interesting…  Illustrations.  I like most of them, I think the style suits, but I also think I would not have really missed them if they were gone.  They’re beautiful but in any book with the 1:1 chapter:illustration ratio to me they are an add on.  They don’t move the story forward, they don’t add anything they are just a glimpse.  That is about as negative as I can get.  Once I had a chance to really get into this, I tore through it.  In some ways this is a pilot episode first book, you have a lot of fun but more than that you feel set up for the stories to come.