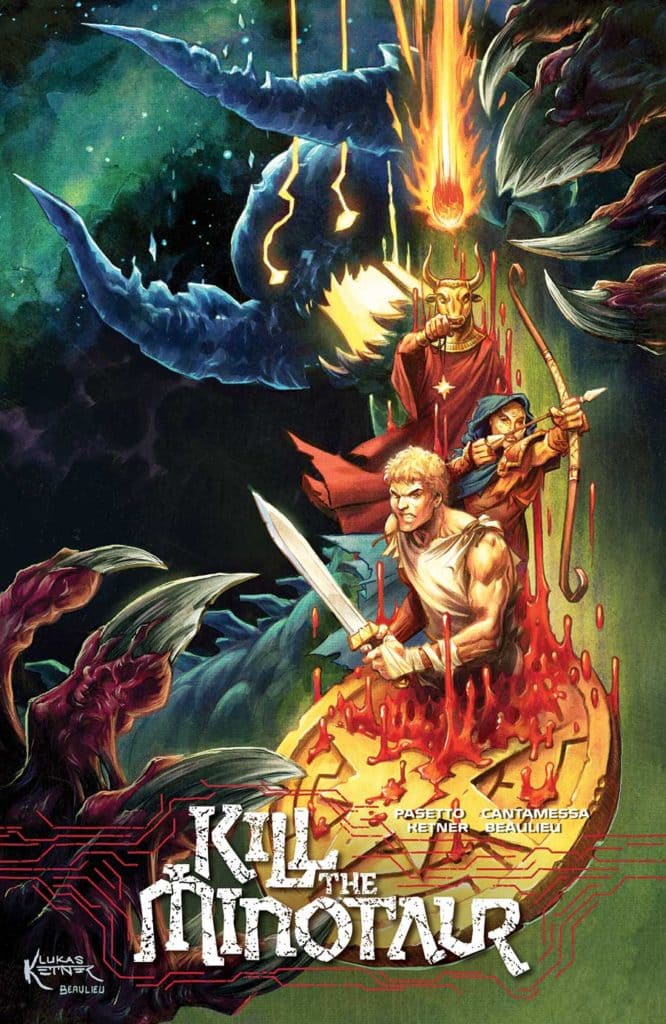 Athens lost the war to Crete. Now, they pay tribute to King Minos by sacrificing their best citizens to his unearthly labyrinth. Conspirators believe Theseus can be the hero they need, who can end the mad king's bloody reign... but no one on this world has ever encountered anything like the savage minotaur.

Chris Pasetto, Christian Cantamessa (Red Dead Redemption) and Lukas Ketner (WITCH DOCTOR) reinvent the most fearsome beast in all of mythology with this horrific tale of heroism.

We’ve done all kinds of books in Acme Comics Book Club but I think this is actually the case in which I most truly had no clue what I was getting into. I LOVED THIS BOOK!

I hardly even know where to begin talking about it. In my head I keep using the word “cool” entirely too often. This is not your grandfather’s mythology. I don’t want to give spoilers but I was surprised again and again. I didn’t refresh myself on the myths before hand but found myself remembering as I went. Even though it is very different the core is still there. You can totally imagine how this story would become the myth.

The art is absolutely gorgeous. The characters are easily discernible and everyone has their own definitive personality. No one feels like background. The details are intense. There is an affection that is pretty much only communicated in the art and it is so clear. The Minotaur is a terror and almost as complex as the labyrinth itself. The colors feel absolutely alive. There is so much depth and dimension but also movement. The action is on point.

The story itself is unpredictable in just the right ways. There are moments when I thought I knew what would happen, but I was wrong and what actually happened was more real. There is a darkness to the story, but not overly so. It is a fantastic story and yet the darkness in it is very based in human cruelty. There are so many different character motivations coming together and evolving. I think that is one of the best parts about this book is that even in just this short time you see the characters evolve. I won’t talk about the ending but they surprised me and then they surprised me again.

A few interesting insights from the meeting… Some people felt it strayed too far from the myth but I was glad that it was so different. There is something that metaphorically represents the thread but I didn’t think of it until someone said it. There is a hero in this book, but it is not the hero of the myth. We were discussing if we felt “horrific tale of heroism” was an accurate description and we belatedly realized it is just not with the hero you initially expect.

We often talk about is this a book you would recommend to other people and I want to hand this book out on the street corner to strangers, I enjoyed it that much. It wasn’t everyone’s thing but I want to find the people that do enjoy it.