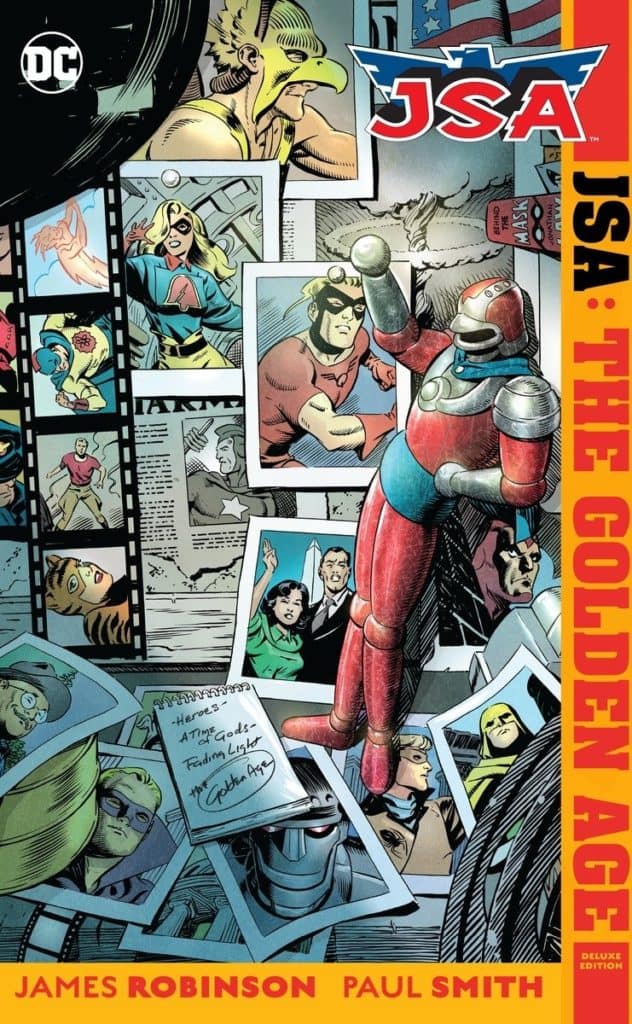 From STARMAN scribe James Robinson, and in the beautiful Deluxe Edition format, comes an alternate history tale that pits the heroes of the Justice Society of America against a devastating, homegrown threat!
Set during the start of one of the darkest periods of U.S. history, the infamous "McCarthy Era," THE GOLDEN AGE takes a thought-provoking look at what might have happened to DC's first generation of superheroes beyond their exploits during the Second World War, when paranoia has taken a chokehold on America.
DC's first generation of superheroes have been driven into retirement or hiding, or madness--except for a few who are willing to change with the times. But behind the scenes, something even more sinister is unfolding--a subtle plot that may engulf the planet and remake it in one man's image.
Collects JSA: THE GOLDEN AGE #1-4.

As soon as I start I can hear the classic news reel announcer clearly in my head. If all the blonde men get in a room together I think I’ll get confused. The end of the mystery men isn’t a blackout, it’s a slow and painful fade to black. 1993… This was written in 1993 but they do a terribly good job of not making it feel like it. The art gives it away but still is an homage to an era. The sense of vaguely ominous is increasing… Bob ripping up the photo breaks my heart. So many lives crumbling. Not crashing, just crumbling. I didn’t expect to think things like is he doing a line of coke? Yep! I sort of suspected the Tex twist, but couldn’t figure out the rest and I love it. I feel like it is some perfectly over the top villainy.

Yes, there is definitely darkness at the end, but also hope. Also I enjoyed a moment when I went full Tolkien and thought about “I am no man.” I’m not sure if it was intentional or not but I definitely enjoyed it. There was more mortality then I initially expected and I liked that some of the important players in the end were not who you would have expected. I feel like they looked at Watchmen but tried to infuse it with the hope of the Golden Age. It is almost like how else could this be done?

Some of the book club folks didn’t enjoy it as much, which surprised me. Normally DC books are the ones where I kind of feel like the odd man out. I think part of the reason was that this cast was a less familiar group and I’m used to not knowing everyone. I often am diving right into characters that I haven’t met before. So I wonder if I am a little more used to having to invest in characters quickly. I might agree the characterization is less and/or different but I think that is partially because it all feels so successfully vintage.

Okay so, I do have a hilarious confession about this… I have totally read the Archie Goodwin Manhunter: Special Edition and no matter how many times they said Paul Kirk, it wasn’t until they said Manhunter that I went oh duh. Mind you that was a resurrected Paul Kirk so it didn’t connect much, but I did know someone!