A Tale of Two Castles by Gail Carson Levine 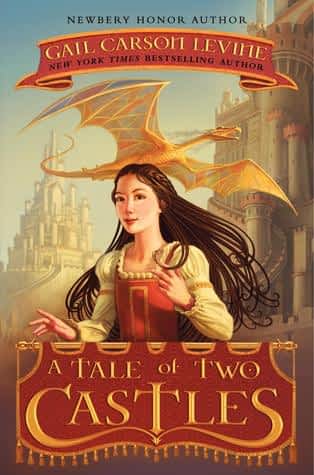 Elodie is supposed to be finding an apprenticeship as a weaver but she has different goals and there are other challenges to be faced.  Her family warned her to be wary of the dragon and the ogre, yet she finds herself deeply involved with both.  It may not be the job she dreamed of but perhaps solving puzzles is the job she was really meant for.

In some ways I could almost just write: This book is by Gail Carson Levine.  If you love her other work, you will love this one.  There is a very Sherlock style of observation used by Elodie and IT.  IT is the dragon, you never assume the sex of a dragon and it is a well kept secret.  I also appreciated Elodie’s thoughts on acting, she dreams of being a mansioner.  Having a BFA in Drama I appreciate her observation of people and the way she thinks about storing away moments for later inspiration.  I think this reflective nature is why she sees the ogre for what he really is.  The culture of the cats is also interesting and something that I am curious to see if it changes, though I expect that the next mystery will take place in a different setting.  There is no romance here but relationships are forged, strong friendships and Elodie is still young.  I think what impressed me most was that I was never ahead of Elodie.  I was never waiting for her to catch up which not to sound conceited is rare for me, especially with something aimed at younger readers.

Of course my favorite stamp of approval: Read it in one sitting.