Tortall and Other Lands: A Collection of Tales by Tamora Pierce 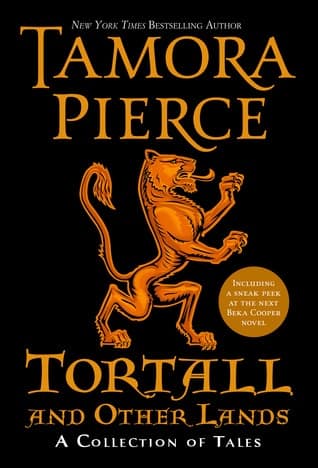 Tortall and Other Lands: A Collection of Tales by Tamora Pierce
Format: Hardcover
Goodreads

The world and people continue beyond the book.  Some of these simply take place in the world of Tortall in familiar places or with familiar circumstances like the Shang warriors.  One takes place as a result of events in one of the novels, another was a future story about main characters.  There are some modern stories which are quite a change from what we are used to.  Some of them even overlap with each other.  I’m going to try to do this one story by story…

“Student of Ostriches” This one I had already read in Young Warriors: Stories of Strength but I was still excited to read it.  The Shang warriors are such an interesting part of the world of Tortall and it’s neighbors, but there is not much about them.  In this story a young girl learns to fight from watching the animals and she changes her fate.

“Elder Brother” In Wolf-Speaker, Numair turns an enemy into an apple tree.  In this story half a world a way it caused an apple tree to become a man.  The tree must learn how to be a man but it is no easy task.  Numair plays only a small role.

“The Hidden Girl” This story connects to the one before.  Two of the characters meet just briefly but it is part of what begins the change in the life of a young woman.  She has helped her father teach the hidden religion but his health is not well.  She cannot abandon their cause but she is only a woman.

“Nawat” After Trickster’s Queen we left Nawat and Aly in love, now we see the birth of their children.  Nawat struggles with the balance between man and crow.  He must decide where his true loyalty lies and every option has high costs.

“The Dragon’s Tale” After the events of The Realms of the Gods Kitten continues to live and travel with her adopted parents Daine and Numair.  She is fiercely independent but must be careful around strangers who fear her.  She finds a human that needs her help but can she succeed when it is so hard for her to communicate?

“Lost” Darkings were first introduced in The Realms of the Gods but they have appeared in the Trickster series as well as the Immortals series.  Here one appears in Tusaine in the company of a young girl who is gifted at math but her hard father stands in the way of her dreams.  A friendly little black dot named Lost is determined to change her lot.

“Time of Proving” I am honestly not sure if this one is in the Tortall universe.  It feels like it could be but none of the places click.  I don’t think it is.  A young woman of the Wind People finds one of the bull people, a scholar who has been harmed by the people of the Merchant City and he can barely take care of himself.  Her people do not believe in helping without trade but can she leave him to die?

“Plain Magic” This is another that I don’t think is in the Tortall universe.  A valley is being attacked by a dragon.  Village after village burns.  The village think they must make a terrible sacrifice to be saved but a traveling trader shows them the truth and the power of just plain magic.

“Mimic” I know this isn’t Tortall because of the dragon rules.  In a valley where the birds aid the farmers and the herders a girl with a penchant for healing animals finds a wounded creature that is neither bird nor lizard.  She calls it mimic because it makes the sounds of the other animals.  Both the dragon and the girl are resisting growing up, but what will make them take the leap.

Okay so I gush about Tamora Pierce.  I can honestly say I absolutely loved all of these stories.  I think about the fact that most writers probably have a stash of finished or just ideas of things that happen on the side lines in their universe or in similar places.  These next two were different.  That doesn’t mean I didn’t like them it just means that they’re a bit of a quick change of gears from the others.

“Huntress” A high school girl, raised in a world of goddess worship, gets a fresh start when she gets a track scholarship to the elite private school.  She tries hard to fit in, but it doesn’t work as well as she thinks it does and the team that she admires so much is not what they appear to be.  In some ways this is scary because the bad guys are made like real people.  The magic is not what is bad, rather the supernatural is what saves us.  Eerie is probably the best word for how this story made me feel.

“Testing” This was interesting because even though it is only partially pulled from reality it gives you some insight into Pierce herself.  It talks about her time after college as a house mother for teenage girls.  She prefaces it with information on the first incarnation of Alanna’s story and how those girls helped her write it.  This is a far cry from what I was used to from her, it was 100% realistic.  I always loved that Pierce could have such harsh moments with such light moments and here with so much reality it is even more so.