The Eye of the World by Robert Jordan 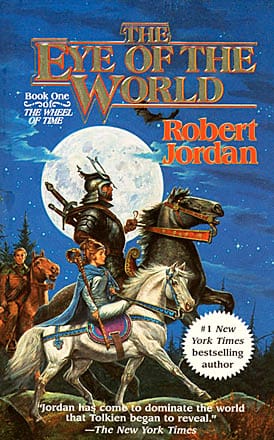 The Eye of the World by Robert Jordan
Series: The Wheel of Time #1
Format: Paperback
Goodreads

When I was in the 9th grade, which is like 9 years ago… (It is a terrifying realization that I am in the 18th grade but I will be done after the 19th) my very cool English teacher kept lists of the books he read on his wall and these kept coming up. I guess at least it wasn’t an entire decade ago… So anyway it took another paintballer, the one I happen to be in love with, recommending them for me to finally start. Usually if a book gets too spread out over a semester I can’t keep it up I lose interest. Well ladies and gentlemen I started reading this in late July/early August, I just finished, and it never lost my interest. I almost feel silly trying to write a summary or talk much about it but I think part of my issue starting was it is intimidating to think about jumping into a universe as well developed and well regarded as Robert Jordan’s. You look at that book shelf and go eek that is a lot, but Jordan never overwhelms you. He might leave you with a terrible itch wondering what something is, what it means, how it works, but your answers will come in time when you are ready for them. Three boys from the town of Three Rivers find their world turned upside down and at first they may seem like pawns being whisked about but each of them is much more than they originally seem. Argh, telling more seems like a bad idea, but there is plenty of action and also plenty of character to go around. The Great Hunt is already in progress and hopefully won’t go quite so long but we are moving from Materials for Children to Materials for Adolescents this semester so we shall see.