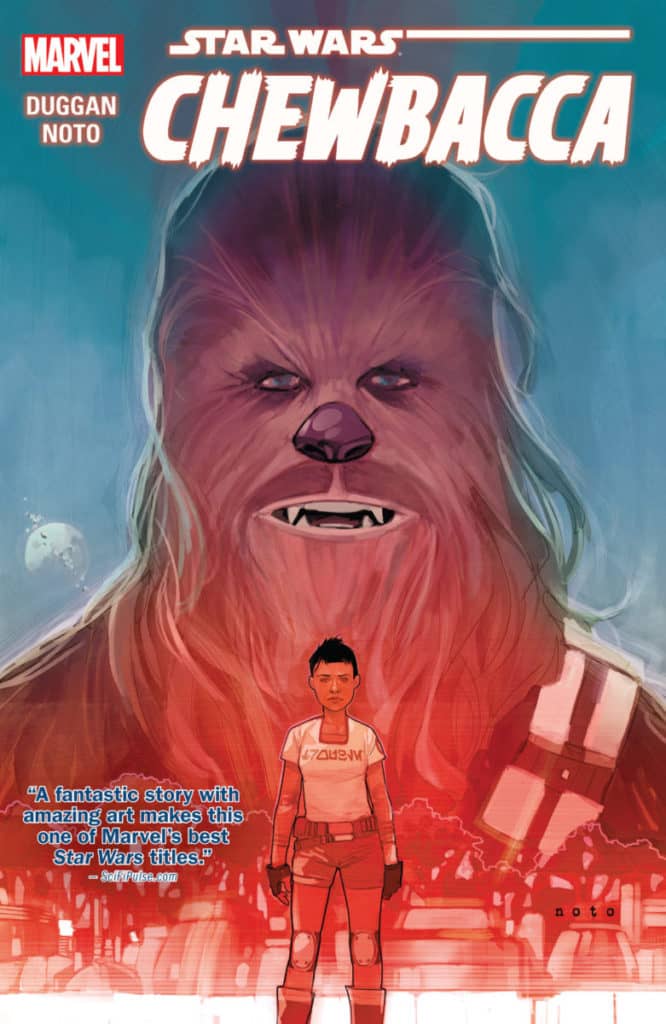 Known as the skilled co-pilot of the infamous Millennium Falcon, the legendary Wookiee warrior CHEWBACCA stars in his very own adventure! After the battle of Yavin, Chewbacca is on his own when he crash lands his ship on an Imperial occupied planet. Now stranded, Chewie finds himself caught in the middle of trying to return to the rebellion and helping a young and feisty girl in need. Writer Gerry Duggan (DEADPOOL, 1872, HULK) and artist Phil Noto (BLACK WIDOW, X-23, UNCANNY X-FORCE) bring us a never-before-seen tale of the heroic Wookiee we all know and love.

The big question answered here would be regarding Chewbacca’s medal but I think it is much more than that. I think it is about Chewbacca as a person, not as Han’s side kick but as a character of his own. Chewie is good at winning people over. We saw it with Luke, and even more so with Leia. The plight of wookie slaves also makes him sympathetic to the under dog. He is also filled with ingenuity, not just anyone could survive as Han’s number 2.

Phil Noto’s art is always gorgeous, it isn’t what you’d normally find in Star Wars, but it suits Chewbacca and this story well. Probably the most impressive part of this book though is how well they handle Chewie’s communication. It flows really well. Zarro helps the comprehension without actually translating and overall it is very charming. Also Chewie laying in a field of flowers is very very charming.