At 10:36 this morning someone drifted away.  That someone was my paternal grandmother, Grandy.  She was 94 years old (for most of my childhood it was a running joke of her refusing to tell my cousin Katie how old she was).  There is sadness but her passing was not a shock.  You could say that we had seven years of warning, when I was leaving for college in August of 2005 “they” said that she would not be around for Christmas.  Apparently they meant to say Christmas seven years from now.  When they predicted her death Grandaddy was still doing relatively well, he passed January 3, 2011.  I always thought he was the more stubborn but I was quite possibly wrong.

She was many things.  For a long time I was unaware of her period traveling NC as a public health educator.  She was a home economics teacher and a mother to two boys.  Two boys that have supplied a lifetimes worth of humorous stories.  My father once broke my uncle’s finger, the lesson was that if you have two boys, you need two bikes.  One story will always be my favorite because I got to live a small part of it.  My dad talked about the wonderful cakes that she baked, but they were always for other people.  Then one day a cake fell and they got to keep it.  Dad asked what makes a cake fall.  He then proceeded to start secretly slamming the oven door to make cake falls.  He over did it and Grandy bought a new stove because she thought it was causing the cakes to fall.  The punchline is I had heard Dad tell that story many times, but one day he told it at Sunday lunch… It was the first time she had heard it.  For decades she had still blamed the stove.

My sister became her granddaughter at the age of 8.  I came along about a year later.  Then my cousin Katie a couple years later.  I’m sure we were an improvement over years of being surrounded by men, but we were a bunch of tom boys for the most part.  We had our girlier moments but we groaned at going shopping with her.  I had no interest in absorbing her cooking and other household wisdoms.  I learned to sew in theatre.  I’m still not really a cook.  It was when I went off to college that I really realized what I had missed, but like I said that first semester was when she first went into the nursing home.  I try to live with no regrets, but this is one that I have been aware of for a while now.  I am glad of the little pieces that we get to keep.  My mom has her recipes, which are difficult to navigate, but my mom also took the time to learn from her so there are many pieces of Ruth Jobe wisdom that I have gotten second hand.  I have her wedding dress and some of her jewelry.  We even have a book of poetry that was a gift from a man in her life before Grandaddy.

It has been a long time since Grandy was really present in the moment.  She had smiled and laugh but if she recognized anybody it was thinking that my dad, Bill, was her brother who he was named for.  He has been gone for a long time but the resemblance has always been there.  To be honest when I think of the person who left this morning… she had been leaving for a long time.  Grandy was the woman who was always the last to sit down for lunch.  She was the woman who let me carefully arrange her Santa collection every Christmas.  The person with the excellent box of toys under the back bedroom bed.  She set a beautiful table and always looked her best.  There are very few moments in the past several years that stick out as much as my childhood.  One would be when she looked at her son and told us “That man is crazy.”  The other would the first time I saw Ruth Jobe eat with her fingers (We always joke about the one time she fussed at my sister for using a fork with a bowl). 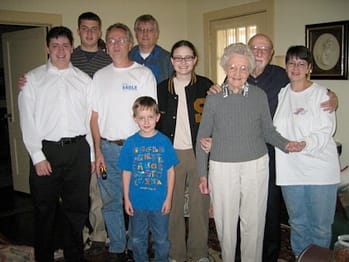 Many of the hard things are past.  Not that it makes today any easier.  She has been going for a long time.  Even before Grandaddy went we made an effort to start going through the house.  I cried the day we sold it.  I cried because of all of the memories.  I cried the day my first cousin got married because I couldn’t stop thinking about all of us young and playing basketball on that driveway.  I’m sure that new couple has done wonderful things without that house but I’ll always picture it just one way.  There are the pieces of the house that have stuck around to.  Ben and I have the living room rug in our living room.  It’s so big it goes up the wall a little bit behind the couch.  Our landlord commented on it recently.

I’ll stop my rambling.  I am glad that Ben had the opportunity to meet both Ruth and Allen Jobe before they died, but I often wish that he could have known them, for that is a very different thing.  For a very long time my father has talked about writing down the family stories.  He has started but I think that now is the moment.  So that future generations can read about R.M. “Jackpot” Thompson.