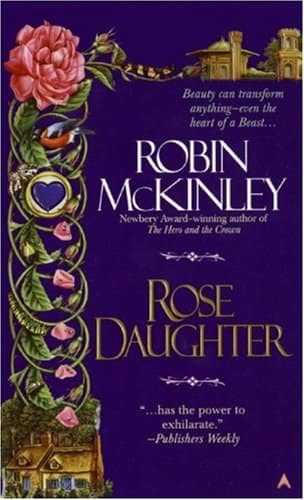 In the author’s notes McKinley talks about how she had always loved the story of Beauty and the Beast but that after Beauty she felt that her telling of that tale was done.  When I read The Blue Sword immediately after Beauty I found myself drawing parallels between the two love stories, in both cases the girl is not quite willingly or unwillingly taken away from what she knows by a man who does it even though he does not wish to hurt her.  In both cases the love develops without either young heroine really noticing because they are struggling to find their place in this new world they have been thrust into.  I may be wrong but the more I read the more I feel that at the core of all of these stories are relationships, friendships and romances, that cross boundaries even when I think of stories like Dragonhaven (that I have yet to revisit on this trip) because that is a story of love that crosses species.  Eh I’ll explore that in this paper I will hopefully write sooner rather than later.  I’ll get back to Rose Daughter.

Yes, Robin McKinley told the story already but it makes me think of the oral storytelling where even when told by the same speaker a story is never the same twice.  I might have mentioned before reading a blog post in which McKinley discusses if she were to write another novel of Damar how different it would be from the originals because of the change in herself.  I think you can see much of the same idea comparing her Beauty to Rose Daughter.  Honour’s (Honour is Beauty #1’s given name.  I feel this might make certain parts of my analysis confusing.  I don’t suppose Thing 1 and Thing 2 is appropriate for academic writing) family had Ger and her father still remembered some work while Beauty’s family set out with nothing but a place to land.  Beauty’s stay with Beast though in some ways shorter I think took much more from her.  Oh and the endings!  I don’t want to say too much but the first is a much fluffier happily ever after while the second, the second has much more depth and weight and is no less happy but no cherry on top.  There are other differences of course, magic is uncommon in the first book and common in the second.  One beauty begins not and the other does.  There are also the similarities, the core thread is still there but in the second it is so much more developed.  I can’t seem to not babble lately.  So I will bid you farewell and dive into Spindle’s End.