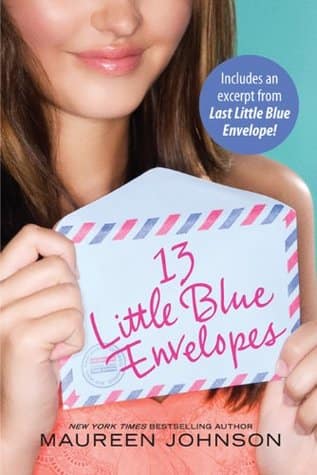 Inside little blue envelope 1 are $1,000 and instructions to buy a plane ticket.In envelope 2 are directions to a specific London flat.

The note in envelope 3 tells Ginny: Find a starving artist.

Because of envelope 4, Ginny and a playwright/thief/ bloke–about–town called Keith go to Scotland together, with somewhat disastrous–though utterly romantic–results. But will she ever see him again?

Everything about Ginny will change this summer, and it's all because of the 13 little blue envelopes.

I went in to this with mixed expectations, obviously this is not my usual fare. Yet I hear such fantastic things about Maureen Johnson and if nothing else you should follow her on Twitter for the entertainment. She has a killer sense of humor, but I think she must have some awkward girl experience in her life to have written this book. Ginny reminds me a lot of how I saw myself at that age so I definitely sympathized with her character. I don’t know that I would have even started the journey.

Overall I think the characters were interesting. Ginny met a lot of people and they made an impression, they had their own stories. This wasn’t just about Ginny and her journey but about a different view of the world, perhaps just being able to see it better. Keith for instance is someone Ginny would have never normally met. I greatly appreciated that while there are romantic feelings there is no earth shattering romances. Aunt Peg has her own story that gets told as well and it is not what you initially expect. I think i was charming. I love the envelopes. Ginny is told not to contact the US, a difficult request, but if things were easy they wouldn’t be interesting. Yes, Ginny faces some difficult situations but she gets through them.

There are those who object to this book because the lack of activity and appearance from Ginny’s parents. This is a common complaint, one that I never really understand. Reading a YA novel is not about finding examples of perfect parents. Helicopter parents don’t make for interesting stories. This is about Ginny coming of age on her own, learning independence. It simply makes sense. Anyway…

The ending is super frustrating… but that is what sequels are for. Mind you the sequel was 6 years later so my understanding is that it was not originally planned.

It isn’t my normal taste but I enjoyed it. But I think now I will go back to fantasy and stop reliving my awkward teen years.