Empire of Bones by N.D. Wilson 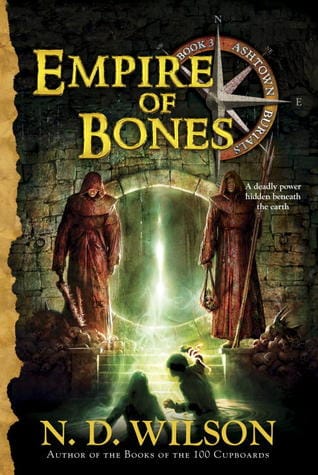 I received this book for free from the Author in exchange for an honest review. This does not affect my opinion of the book or the content of my review.

Fans of both Percy Jackson and Indiana Jones will be captivated by the lost civilizations, ancient secrets, and buried treasure found in the third book of the Ashtown Burials series, an action-packed adventure by N. D. Wilson, the author of Leepike Ridge and the 100 Cupboards trilogy.

Cyrus and Antigone Smith have thwarted Dr. Phoenix's plans—for the moment. And they've uncovered a new threat from the transmortals and managed to escape with their lives. Their next adventure will take them deep into the caves below Ashtown, where they will look for help from those imprisoned in one of Ashtown's oldest tombs.

All the things! I apologize if I start just squealing and rambling. Technically the author’s wife approached me about this book, and thank goodness that she did. I loved the first book and immediately put the second on my want list but it was obviously a while before that was available. I got it for Christmas in 2012, but I am easily distracted, obviously. So when she approached me I was glad and it pushed this series back up priority wise. I am so glad that it did. Now I shall just have to live in misery until he finishes the series.

I honestly wasn’t sure about the length of this series when I started this volume. I didn’t really think that we were at the end but trilogies are just so popular right now that you have to wonder. After reading it I did find something that said the anticipated length is 5 books. That length just feels right.

The character development continues to be smooth. Each book has the characters developing another level, but it isn’t sudden leaps. You feel them stretching and then reaching. For instance midway through this book Cyrus realizes his role in this war. It isn’t sudden you see the contemplation that leads to it and he even has mostly known but struggled for a while. Cyrus and Antigone are of course always at the forefront but the more you get to know  the rest of the cast the more you appreciate them, though not everyone will survive. That is the way of the world.

The threats are rising as are the responsibilities. Billy Bones set them on this adventure and while his role might be over, he still has things for them to do. He may not have had the respect of the Order but in their most dire hour he is the one person who was preparing for this day. The Order is not what it once was and that is shown particularly in the end. I find myself curious about the other estates, such as the African Carthage Estate. Those don’t have burials so I wonder if they are even more so… frivolous than Ashtown has become. Or are they just different entirely. What will the order look like after all of this is over? I think it will be a different creature entirely. I think in a horrible way this could be good for the Order, if it survives.

I honestly don’t feel like I have gushed enough. I enjoyed every minute of this. Every detail of the characters, of the world. I finished this book at 2am breathless. I threw a little fit and Ben looked at me like I was crazy because it was such an adrenaline rush and it was so hard to stop , but I knew there wouldn’t be any more for a while. I’m not usually one for a lot of social media but I got on Twitter to express my frustration. N.D. Wilson is a true storyteller.

The Drowned Vault by N.D. Wilson

The Dragon’s Tooth by N. D.