The Drowned Vault by N.D. Wilson 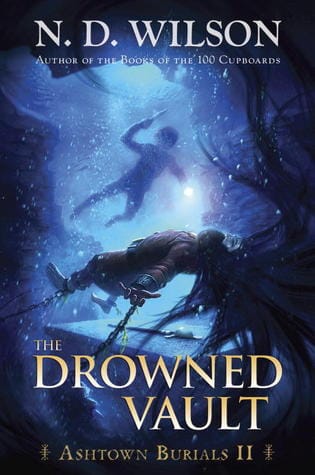 Fans of both Percy Jackson and Indiana Jones will be captivated by the lost civilizations, ancient secrets, and buried treasure found in the second book of the Ashtown Burials series, action-packed adventure by N. D. Wilson, the author of Leepike Ridge and the 100 Cupboards trilogy.

It's been almost a year since Cyrus and Antigone Smith earned their places as Journeymen at Ashtown, home of an ancient order of explorers that has long guarded the world's secrets and treasures. While their studies go well, Cy and Tigs are not well liked since losing the Dragon's Tooth to the nefarious Dr. Phoenix. The Tooth is the only object in the world capable of killing the long-lived transmortals, and Phoenix has been tracking them down one-by-one, and murdering them.

The surviving transmortals, led by legendary warrior Gilgamesh of Uruk, descend on Ashtown in force, demanding justice. Cy and Tigs find themselves on the run in a desperate search to locate Phoenix and regain the Tooth. In the process, they uncover an evil even more dangerous than Phoenix, one that has been waiting for centuries to emerge.

I finished the first book in this series just over two years ago and I didn’t take the time to give myself a very good refresher so there was definitely a brief period when beginning this book when I was worried because I couldn’t remember specifics. I could remember that the first book was filled with incredible detail, because I admired that so, but I was worried my leaky brain would prevent from enjoying the second book. Wilson did a fantastic job of, when referencing something that happened previously, giving just enough of a reminder to bring it all back to me. It was never so much that it felt like a recap but I was never left struggling to recall.

So after a little bit of a hesitant start. My reaction to this is the same as the first yes, yes, yes, and yes. The world building just leaves me in awe. I had forgotten about the Treasure Island references of the first book, but really it is everything. The details of the Order and the traditions and how it functions and the historical figures connected to it. Captain John Smith did decapitate three men. I even wonder about the island… but that is getting spoilery. The point is that Wilson brings in mythological and historical figures, weaves them into this world and even uses lesser known bits about them.

Cyrus and Antigone are learning many things, to be members of the order, about the Smiths, but they don’t have much time to learn before life gets interesting again. They have a tight knit group of friends but there are many who think that the world would be a better place without any Smiths. Conflict and unrest have come to this secret world and many blame the Smiths. We get to see a lot more of the Order and their toys in this adventure, because now our heroes are firmly part of this world.  There are a lot of new faces, some of them a bit scarier than others. Ahhh I don’t even know what to say, just go read it! All of you, now! Actually start with the first book, meanwhile I’m going to work on #3.

Empire of Bones by N.D. Wilson

The Dragon’s Tooth by N. D.