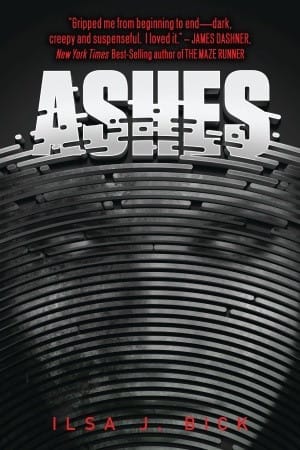 Okay so first I want to go ahead and address “zombie book” syndrome.  Yes, there are things similar to zombies in this book, though not of the traditional sort.  I’ve done a zombie booktalk so I’ll admit there are zombie books, but to me it is not a genre.  There are zombie books that are high school dramas, ones that are romantic or dystopian or both.  This too me is primarily dystopian, more about survival and the collapse of society then about what happened to cause the chaos.  Don’t get me wrong I think later in the series that whatever caused all the changes will be very important.

Alex went into the woods for very personal reasons but all that changed when the zap, an electromagnetic pulse tore through every device, person and animal.  No one has any idea how much area it covered or how much damage was done.  Alex is struggling to protect herself and the little girl Ellie, they meet up with Tom, a young soldier who also has secrets.  They have to return to the world but survivors could be more dangerous than the Changed.

It felt well researched, it matched what I know.  I truly love Alex, she is an excellent combination of spunky and vulnerable.  I was a little worried when we first met Tom that we were going to dive into head over heels romance, but it wasn’t that bad.  There are some strong feelings and some tugging strings but survival and who to trust are still the major threads of the story.  When I started this I did not realize it was the beginning of a series.  I realized part way through reading it thanks to Goodreads.  It’s not a bad thing, just disorienting when you don’t realize going in.  This one ends with a serious cliff hanger.  I really liked this book.  I am curious as to what happens but I’ll admit I have many books that I am more curious about.  I’ll keep this one and maybe I’ll get to finishing the series someday.