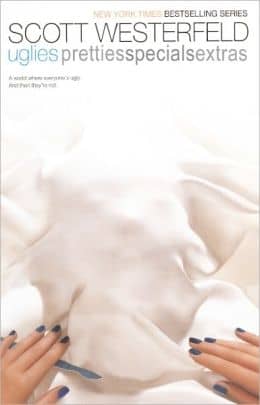 Tally is about to turn sixteen, and she can't wait. Not for her license -- for turning pretty. In Tally's world, your sixteenth birthday brings an operation that turns you from a repellent ugly into a stunningly attractive pretty and catapults you into a high-tech paradise where your only job is to have a really great time. In just a few weeks Tally will be there. But Tally's new friend Shay isn't sure she wants to be pretty. She'd rather risk life on the outside. When Shay runs away, Tally learns about a whole new side of the pretty world -- and it isn't very pretty. The authorities offer Tally the worst choice she can imagine: find her friend and turn her in, or never turn pretty at all. The choice Tally makes changes her world forever.

AHHH!!!!!!!! I’ve been procrastinating on this post so much I feel like I can hardly remember the ending of the book!

I enjoyed Uglies way more than I anticipated. I don’t really buy eBooks usually. I occasionally grab good ones when they are free and I’ve bought a couple of the eBook Humble Bundles. I mainly read these when I have extra down time at lunch or waiting on an appointment. Uglies was one of the titles I had that was more familiar to me. It is hard for me to put in accurate scale how much I liked it because I honestly expected it to make my brain bleed.

I liked Tally. Westerfeld wrote her and the world so that it really is easy to see things her way. She tries but things aren’t easy. She truly does carry this tale. The other important characters are minimal. Even Shay definitely has her purposes. I do really like David as well. He is the contrast to Tally and the differences in them are what really emphasize the dilemmas of this world.

Westerfeld does a good job of alluding to the reveals that will happen later, the reveal that makes the reader and Tally both realize that being Pretty really is bad. I think what brought me around was that in many of the dystopian novels the author creates the world as if it is a believable utopia and we need our brilliant hero to show us what is wrong. Yet the reader thinks the world is horrible from the start, we never really get the utopia, we’re never torn. Here, I think many of us would agree to the premise of this world. We wouldn’t fight it. People like Shay do resist it, but it is just their personality. They don’t realize the true darkness and neither does the reader. Tally isn’t resistant, not really. She just struck me as quite believable.

So which side of your face do you like better?