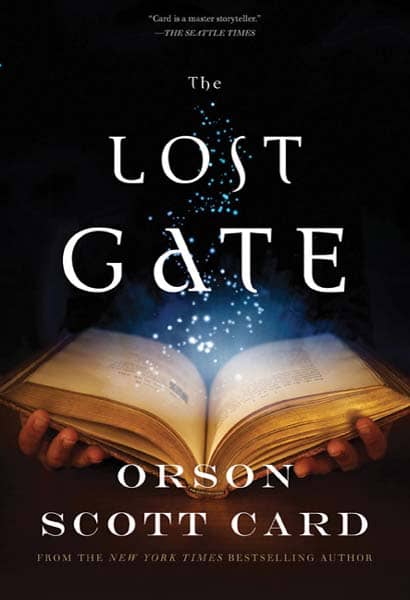 I suppose I should start with Orson Scott Card himself.  When you’re a kid you’re not exactly into things like reading the author biographies unless you develop a favorite.  So when a friend convinced me to read Ender’s Game, I didn’t pay much attention to the man behind the curtain even though I loved it.  Then I reread it in college.  I just happened to go to college at the University of North Carolina at Greensboro.  I was reading the scene where he comes to earth and suddenly realized I knew the name of that lake.  So I immediately jumped on the computer and then probably smacked myself on the forehead for not realizing he lived here.  Ironically my copy of The Lost Gate is signed but is was signed last summer in New Orleans, and yes I did the fan girl super speedy while you sign babble about when I realized he lived in Greensboro.  Also of note he is like a rock star to librarians and he definitely knows how to work that crowd.  I love his work but obviously he is one of many on my to do list.  So on to the book.

LOVE!  Alright so I’m decent with my various mythologies and lately I keep meaning to read more because this is probably my favorite trend.  I’m currently working on Ben reading American Gods by Neil Gaiman, I just finally watched the movie version of The Lightning Thief by Rick Riordan, and I’m constantly recommending The Alchemyst by Michael Scott.  Everybody does it different but I love them all.  So Danny North is descended from the ancient gods, the Norths are just one of several Families that still exist raising their children in the practice of magic away from the regular world.  Danny thinks he is a drekka, ungifted, but the Family has noticed things and they are planning on using him but he is not the type to be used so he sets off alone and without training.

It starts with Danny at age 13 and he is 16 by the end.  The gaps are covered with good summaries and placed with the chapters that take place elsewhere.  I think part of why I love… (what do you call them urban mythology, modern mythic, is there a term for them?)  is because you take the skill of world building, the difficult of creating a magic system and into that you add integrating a multiple mythological systems into one logical system.  What he creates is absolutely beautiful and believable but I suppose he has been perfecting this concept since 1977.