The Founding by Dan Abnett 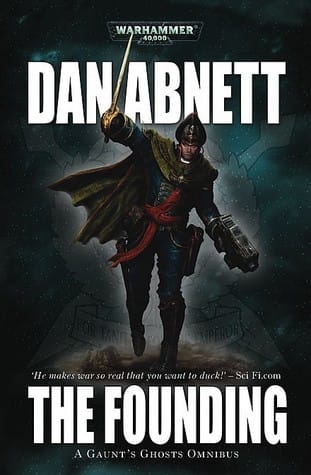 Ibram Gaunt already was a rare man and then before Warmaster Slaydo died he made Gaunt the only colonel and commissar. Then he goes to gather his brand new troops. On the day of the founding of their regiments the planet is destroyed and only a fraction of the men make it off the planet.

First and Only: It was after I read this one and the second that I found out that the second was partially short stories originally published else where, merged into a novel. There is a bit of jumping around but in some ways it allows you to get a broad view of the group very quickly. This was the first original novel published by the black library. You can make certain guesses about who will live and die but Abnett will surprise you. Sometimes they will live when you least expect it, other times you think someone is going to live and they die quickly and harshly. These men face corruption and harsh prejudice but keep fighting the good fight. Even those who resent Gaunt follow him.

Ghostmaker: The bonds between the ghosts are being forged. It has been some time since the fall of Tanith but it is still fresh in the hearts of the men. The narrative structure here is easier to follow than the first book. The main action takes place on Monthax, an unpleasant planet. In the beginning Monthax is slow and the action there alternates with short stories about various men in the unit. Each provides good character and group dynamic insight.

Necropolis: They think this is a hive war on Verghast. The fight for the city of Vervunhive but there is more going on here then trade conflict. This novel stays much more in the present. We see some familiar faces of those we have fought beside in previous books, but there are also new faces. The residents of this place have more in common with the Tanith than anyone expects. Gaunt has the chance to take a true leadership position, but in the end he is a man that fights beside his troops. It amazes me how Abnett can make me upset at the death of someone I wanted to die the whole book.

In Remembrance: This short story takes place near the end of Necropolis and looks at the aftermath of the combat. We get to see the Tanith first from the perspective of an outsider, an artist of all things. He expresses his inability to capture their unique character.