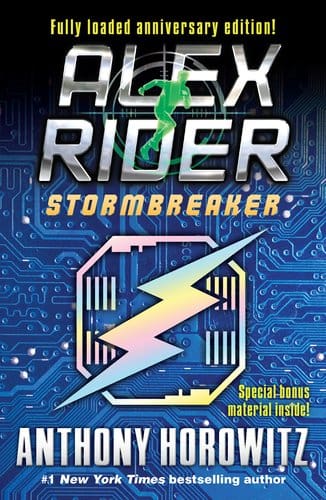 I’ll admit when I first was introduced to the concept of this series I was intrigued but skeptical.  I read the “fully loaded anniversary edition” which includes an additional short story with a letter from the author.  I’ll start there even though I read that after the book.  In the letter Horowitz talks about his love of younger James Bonds, which is something I agree with.  I also enjoy the things he did to make Rider different than Bond, for example being coerced instead of a patriot.  Alex Rider has been raised by his uncle Ian Rider, a mysterious man who he was told was just a bank executive but really he was a spy and all along he had been training Alex to follow in his footsteps.  No one expected for Alex to follow so soon though but when Ian is murdered, 14 year old Alex must step up to the plate.  It is up to him to find out the secret behind the Stormbreaker computer that got his uncle killed.  I like that it is still a fairly easy read but when you read the first sentence it doesn’t scream at me easy read.  Though honestly I am terrible at placing books by difficulty.  I like that it feels mostly authentic, that Horowitz does his research and the only fantastic things are the bad guys and the gadgets which are what make it true spy fare.  Violence wise it is quite mild.  There are karate kicks but Alex usually doesn’t have a gun.  Of course the bad guys do have guns and people do get shot and some do die.  No gore, no massacres in some ways it is very much like the old James Bond movies but without the scantily clad women.  I’m glad most of the rest of the semester is stand alone books because if I kept starting series and not getting to finish them I might pop!