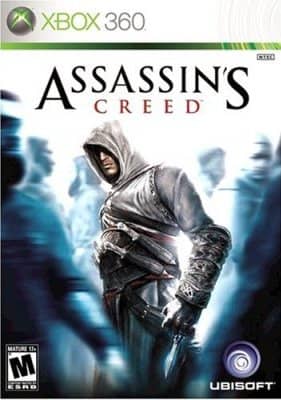 You probably think I am crazy talking about a series this large in one post but for one thing they are structured together to such a degree that it is like a series of books you read a couple years back or a TV show you watched all the seasons at once and you cannot remember where the breaks were without going online and looking up summaries.  There are many huge trends in the series at this point that would be spoilers if you were knew so we will cover the most basic.  The concept of genetic memory, that with the right program I could access the memories of my ancestor Matoaka, or others that I don’t even know their names.  I could relive what they saw to better under stand the past.  This is why the Templars want Desmond Miles, ex-Assassin, because his Assassin ancestors saw and did very important things.

Desmond Miles – It definitely took me longer to warm up to him than his ancestors.  You feel concern for him, but it is harder to get to know him in his isolation at first.  Though he has much more time to win you over as he in every game so far in the series.  It is most obvious to watch the development of the graphics by looking at his face in the various games.

Altaïr Ibn-La’Ahad – Was a character unlike anything we had seen before (okay the Prince of Persia jumped around a lot but that was his whole character). Altaïr not only moved like something new, he looked fantastic, he felt fantastic.  He was not white.  When people look back and think of this series I think he will always be the strongest image that arises, the first game was all his, well and Desmond’s.

Ezio Auditore da Firenze – He wins for holding the most real estate in the series so far.  He is the “star” of II, Brotherhood and Revelations though Altaïr was still making appearances.  They won us over with the first game and then they went alright they trust us lets try thing and we kept trusting them and they kept experimenting.  In these games we watch both Altaïr and Ezio grow old, something I never really expected until it was happening.

This is where I confess my current playing status.  I was most of the way through Revelations when I corrupted my save file.  That required a break for a frustrated assassin.  I haven’t even started III yet, Ben just finished it, but shame on me I sat here proofreading and NaNoWriMoing and watched him play like it was one really long fantastic movie.

Ratonhnhaké:ton aka Connor – We get to start younger than anybody else which is interesting for the fact he is not aware of the Assassin blood in his veins until later in life.  The fighting styles are more unique.  The wold feels less copy and paste and more… just how accurate is this?  The big question is will Connor get some named sequels?  If so how many?  How will it work after the most mind boggling ending yet.

The Assassin’s Creed games are very good at making you ask questions, of the story, of history, of the world and of yourself.  Sometimes I worry they will ask too many questions, write themselves into a corner or into the ground, but I also wonder just how big the plan in their heads already is.  So far I am impressed and enjoying the ride.  I won’t worry until that stops.  There are still so many places this could go.  So many times and people and really… I’m pretty sure even if this series gets stretched to its story line breaking point I will still be ready to play it.  Though man I really want them to make a console game female protagonist.